Max Bill is a name which commands respect across a number of disciplines. Bill started his career with a silversmith apprenticeship before going on to bigger and better things. He was a successful architect, painter and graphic designer many among other things and had an impact unlike anyone else on Swiss art. Today, Max Bill is remembered for his influential body of work and has often been called “the last Leonardo of the twentieth century.”

One of the other things was designing watches, which was something he was incredibly good at. Max Bill watches make up a huge part of the Junghans watch collection today – over half a century since they were first designed.

Who Was Max Bill? 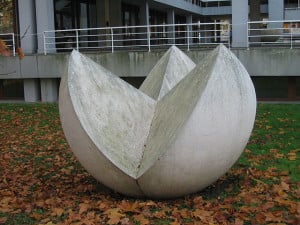 Max Bill was born in Winterthur in the canton of Zurich, Switzerland on the 22nd of December 1908. At the age of 16, Bill started an apprenticeship as a silversmith which was completed in 1927. After completing the apprenticeship he took up studies at the Bauhaus in Dessau.

Bauhaus design was all about simplicity, with form and function working together to produce something beautiful.The Bauhaus was changing the aesthetics of the entire western world until it was closed by the Nazi’s. Max Bill’s studies took place under Josef Albers, Paul Klee and Oskar Schlemmer – some of the most respected designers of the day. Although in years to come Max Bill would arguably be recognised as much more influential than his teachers.

After completing his studies he moved to Zurich and started his work. He worked on graphic designs for the modern buildings being constructed, he also built his first work – his own house and studio in 1933.

Max Bill was a member of the Parisian group of artists “Abstraction-Creation” from 1932-1936. He held his first exhibition at the group’s gallery in 1933. Max Bill joined the association of modern Swiss artists, Allianz in 1937 and became a professor at the school of arts in Zurich in 1944.

Max Bill was trusted to take a key role in implementing the Marshall Plan for rebuilding Germany following the Second World War. This role was partly given to Bill for his early anti-fascist efforts, which began before the Nazi’s seized power in Germany. He built the Academy of Design in Ulm in 1953 and became the University’s first rector.

The list of work which Bill completed over the coming years is way too long to cover here, however the impact of his work can be seen all over the world. Much of his work took place in Europe but his influence spread as far as Brazil! Max Bill was credited with being “the spark that lighted the fuse of Brazil’s artistic revolution” following his retrospective at the Museu de Arte Moderna de Sao Paulo.

Max Bill was the first Swiss person to receive the Praemium Imperiale, often known as the Nobel prize for the Arts. It was awarded to him in 1993, one year before his death in Berlin on December the 9th 1994. 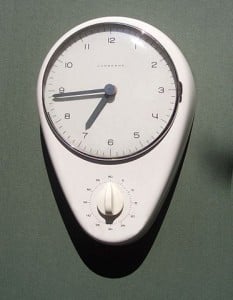 Max Bill was the biggest impact on Swiss graphic design in the 1950’s. But his name was written into the history books of horology when Junghans approached Bill to design a series of clocks and watches.

Junghans was founded in 1861 when Erhard Junghans and his brother in law founded a clock component factory. They started by crafting components for other clocks before creating their own clocks in 1866. The company were known as the largest clock and watch factory in the world by 1903, with over 3,000 employees producing over 3 million watches per year.

By the 1950’s Junghans had been considering having clocks designed by an artist. As Max Bill was already a renowned product designer he seemed to be the perfect choice. Max Bill was fascinated by time, which made it easy for him to accept the offer.

He set to work crafting beautiful and elegant clocks and watches along with his students. His first piece was a wall clock. Max Bill’s design combined clean lines, simple geometry and a unique typeface. This design was so popular that a range of wristwatches based on the design were released in five years later.

By releasing these watches, Max Bill created a line of horological Bauhaus classics which will forever bear his name. It is a testament to Max Bill’s design expertise that many people think of his watches whenever the Junghans brand is mentioned. 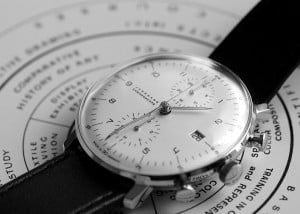 The Junghans website describe Max Bill watches as “one of the most fascinating watch series ever designed” and call the collection “The Power Of Simplicity.” 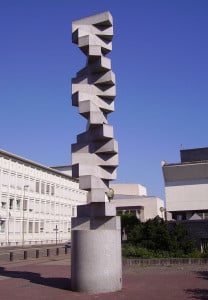 When you buy a Max Bill watch, you own a piece of product design history. The simplicity in the design of the watches epitomises the Bauhaus style design with the form and function of your watch working together seamlessly.

If you are looking for something which is more than just another watch in your collection then a Max Bill watch is perfect for you. The entire line of watches are a piece of product design history: a range of watches crafted by one of the most influential figures in design of the 20th century.

Each of these watches would be a perfect addition to any watch collection. It is a piece of beautiful art built into a collection of incredible wristwatches. Whether you want to add a mechanical beauty to your collection or whether you want the accuracy of quartz inside a beautifully designed watch, there will be something for you!