Following the huge hit of the 2020 Seiko 5 Sports Brian May, the Japanese brand and the legendary guitarist of Queen join forces for round two. Inspired by the rocker’s guitar Red Special, the second collaboration, the reference SRPH80K1, comes in a matte golden case, an allusion to Brian May’s newly released Gold Series, a reissue of his solo albums. 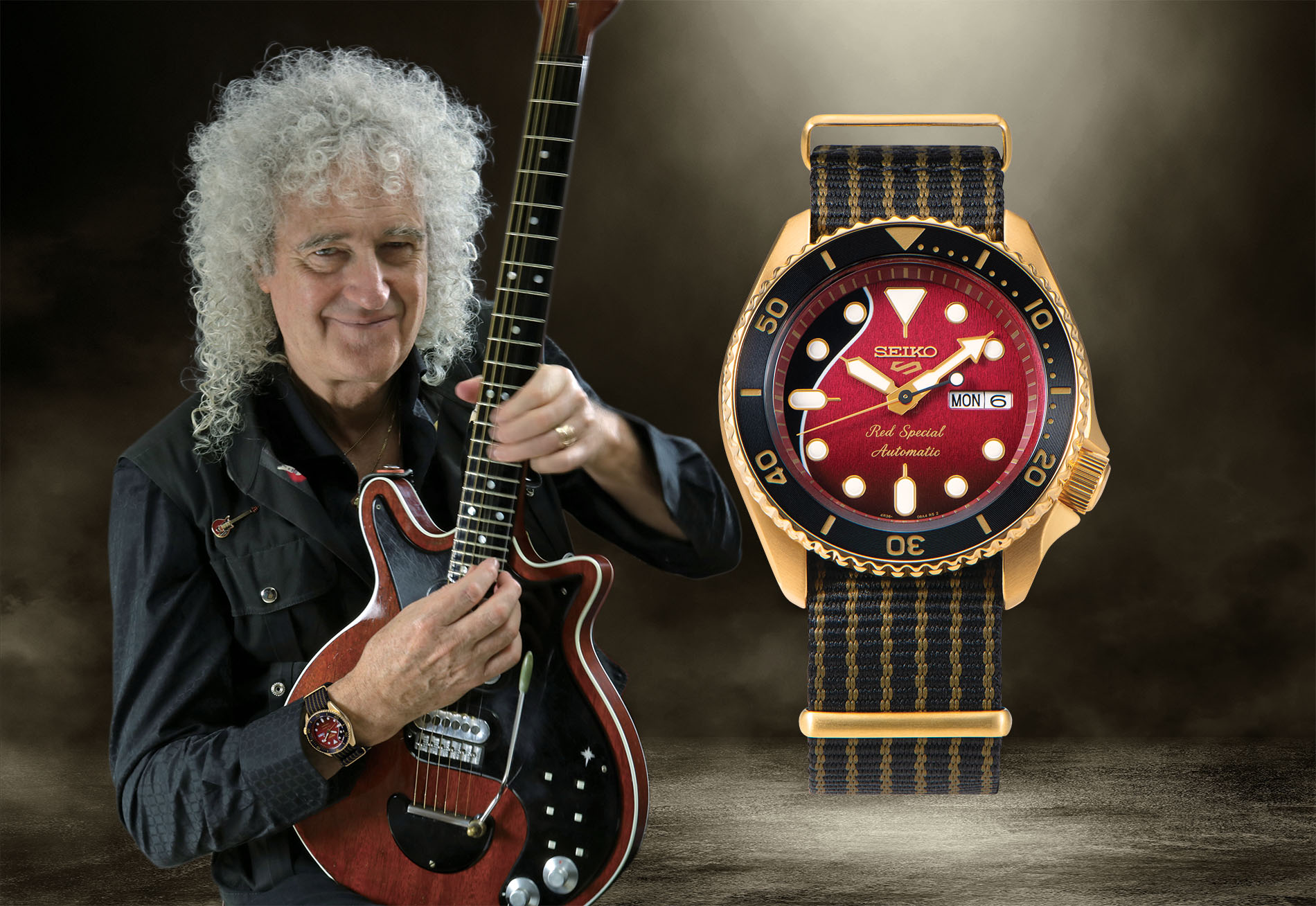 As any Queen fan worth their salt knows, Brian May’s “Red Special” guitar was made by hand from scratch by the guitarist and his father. The neck was carved from the wood of an old fireplace, while the body was made from blockboard with an ancient oak insert and coated with a mahogany veneer that Brian stained and polished. His innovative tremolo system featured a hand-carved mild steel rocker plate pivoting on a knife edge, with the string’s tension balanced by motorcycle valve springs. Buttons were used to mark the frets, and a sixpence coin as a pick. The sound produced is unique and perfectly recognisable in all Queen’s recordings, from the first in 1973 until today. 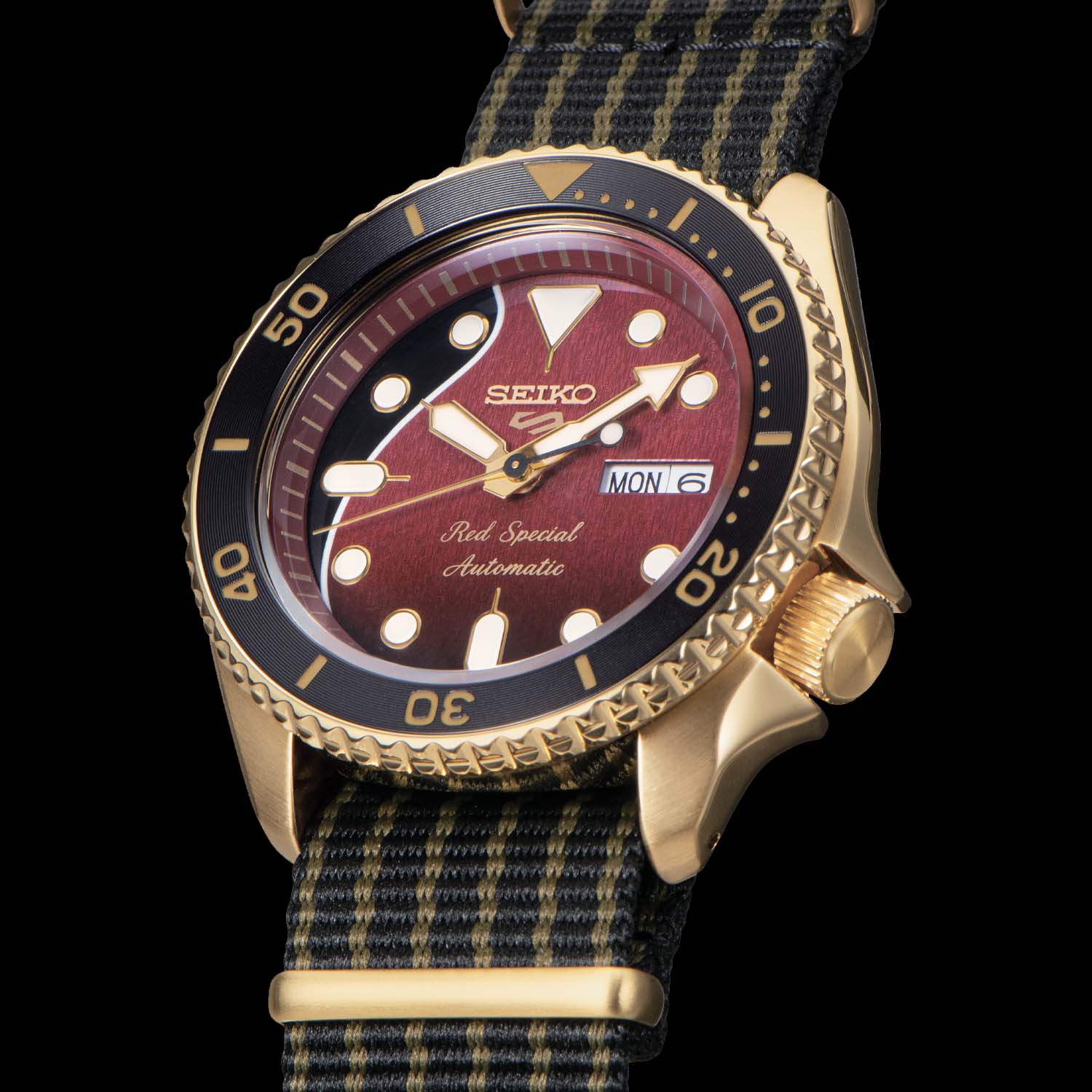 Like the former edition, the dial recreates the curvy shapes of May’s guitar with a predominant use of a gradient red pressed pattern that recreates the texture of wood. However, in keeping with the new gold-coloured case, the hands and indices on the dial have golden frames, and the inscriptions are also golden. 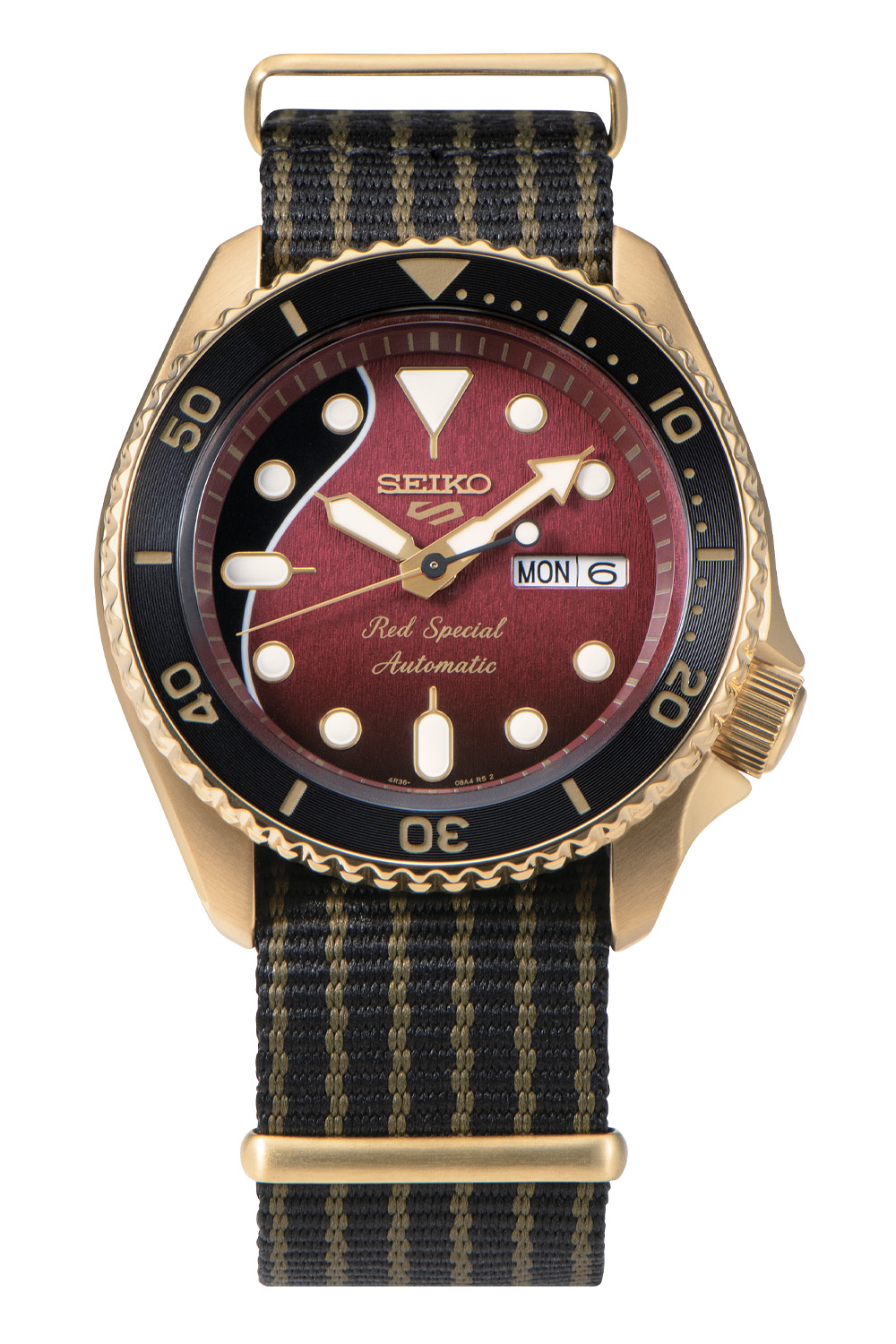 For more than forty years, Brian May relied on his Seiko 7548 (quartz) diver that he bought on a trip to Japan in 1975. When it came to designing his first watch with Seiko, the natural choice was a Seiko 5 Sports with its signature crown at 4 o’clock flanked by two crown guards. Like May’s former diver, the Seiko 5 Sports is a versatile and robust sports watch but it is equipped with an automatic movement. The case is water-resistant to 100 metres, and the hands and indices are treated with Seiko’s proprietary LumiBrite.The case is identical to the 2020 edition and has a diameter of 42mm, a height of 13mm, a length of 46mm and weighs 94g. The anodised aluminium bezel with its knurled edge features golden numerals to match the case. The flat glass over the dial is Seiko’s Hardlex glass and is placed just below the bezel for additional protection. 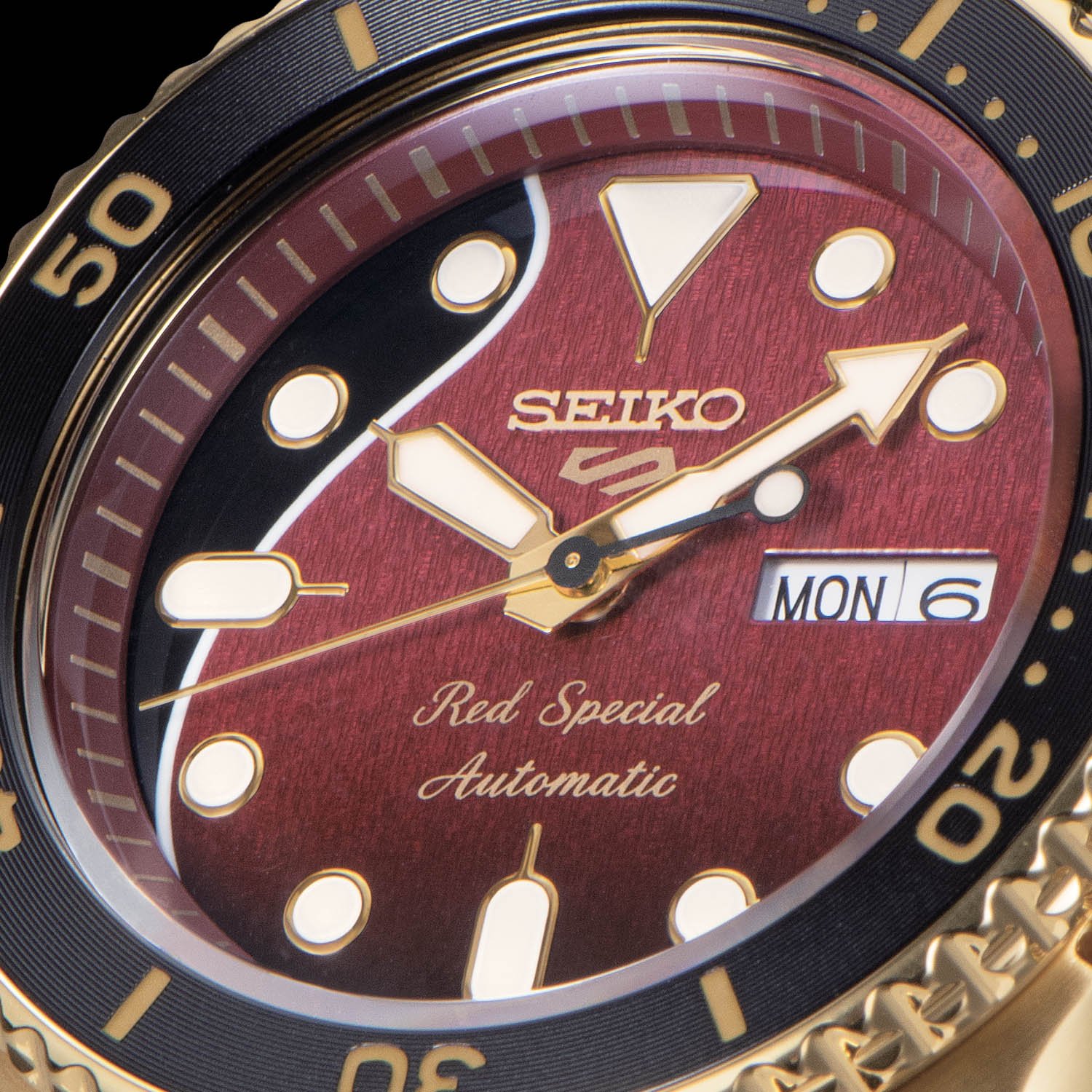 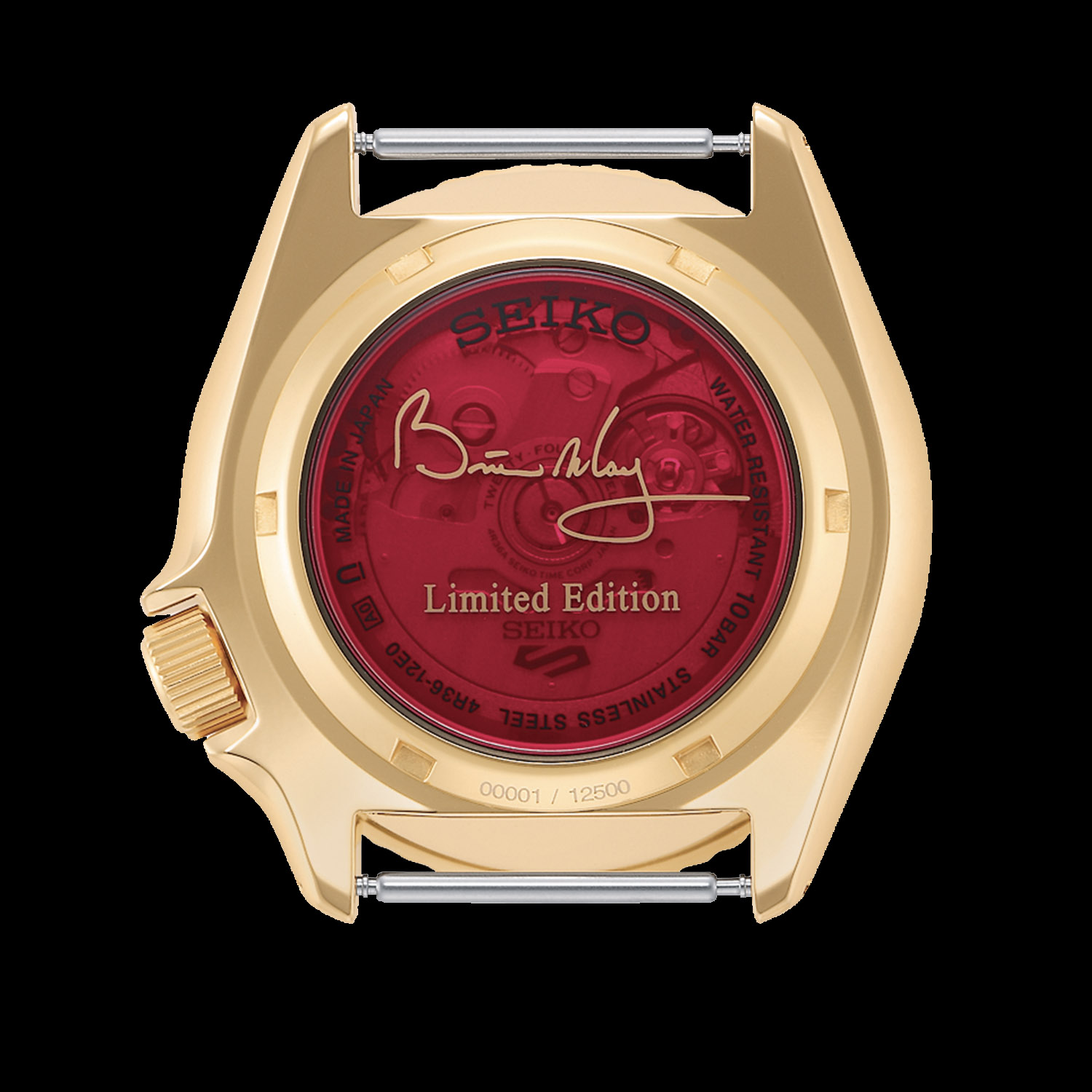 Another novelty of the new Seiko 5 Sports x Brian May is the nylon strap woven with golden vertical stripes to resemble guitar strings. The red glass on the reverse side of the watch features Brian May’s signature and the words Limited Edition in golden paint, and an engraved serial number 00001/12500 on the metal. The watch is powered by Seiko’s in-house automatic calibre 4R36 with its 3Hz balance, stop seconds, magnetic resistance to 4,800 A/m and a somewhat limited power reserve of 40 hours. 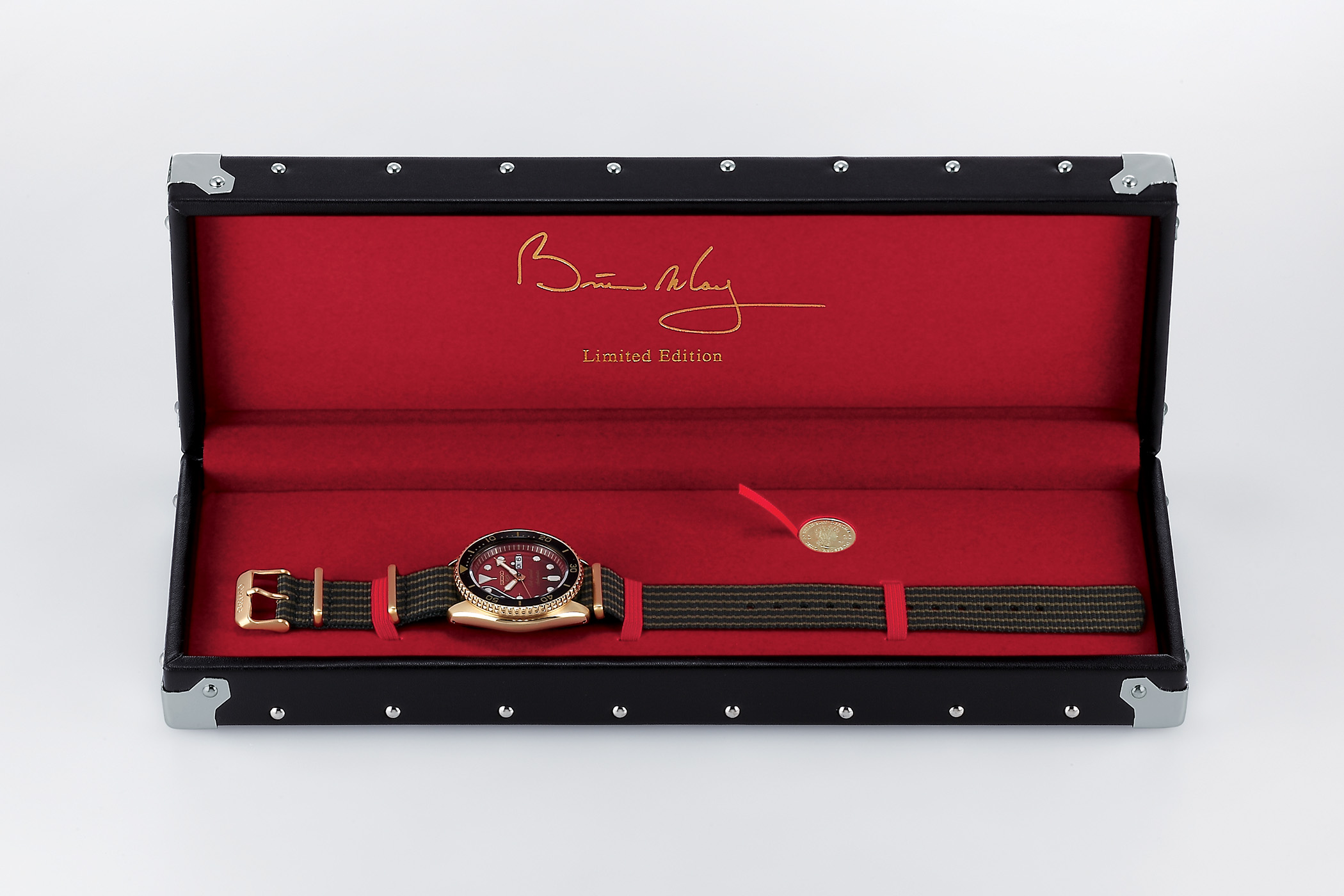 Limited to 12,500 pieces, this collector’s piece comes in a special presentation box that looks like a guitar case, complete with a lucky sixpence coin. The Seiko 5 Sports Brian May Limited Edition SRPH80K1 watch will be available in March 2022 and retails for RM 2,900. Part of the proceeds will be donated to The Mercury Phoenix Trust, a charity organisation founded by Brian May, Roger Taylor and Queen manager Jim Beach in memory of Freddie Mercury to help fund the fight against AIDS worldwide.