Skip to content
In late 2020, Seiko announced something very special, at least to people with a little knowledge of the brand’s history and evolution through the decades. While Seiko was founded in 1881 and through the years saw immense prosperity, it has many very interesting chapters in that long history. Today it is one of the biggest watch manufacturers in the world, with a huge collection under various sub-labels or even a separate brand entirely. The introduction of the King Seiko KSK SJE083 towards the end of 2020 revived the fabled internal rivalry with Grand Seiko. That very watch left us wondering though, would Seiko do more with the King Seiko legacy than just this one-time limited edition? Surely not! So with a resounding “Long live the King,” we formally welcome back the King Seiko collection, with the introduction of 5 new references. And they are non-limited, more compact, more accessible… 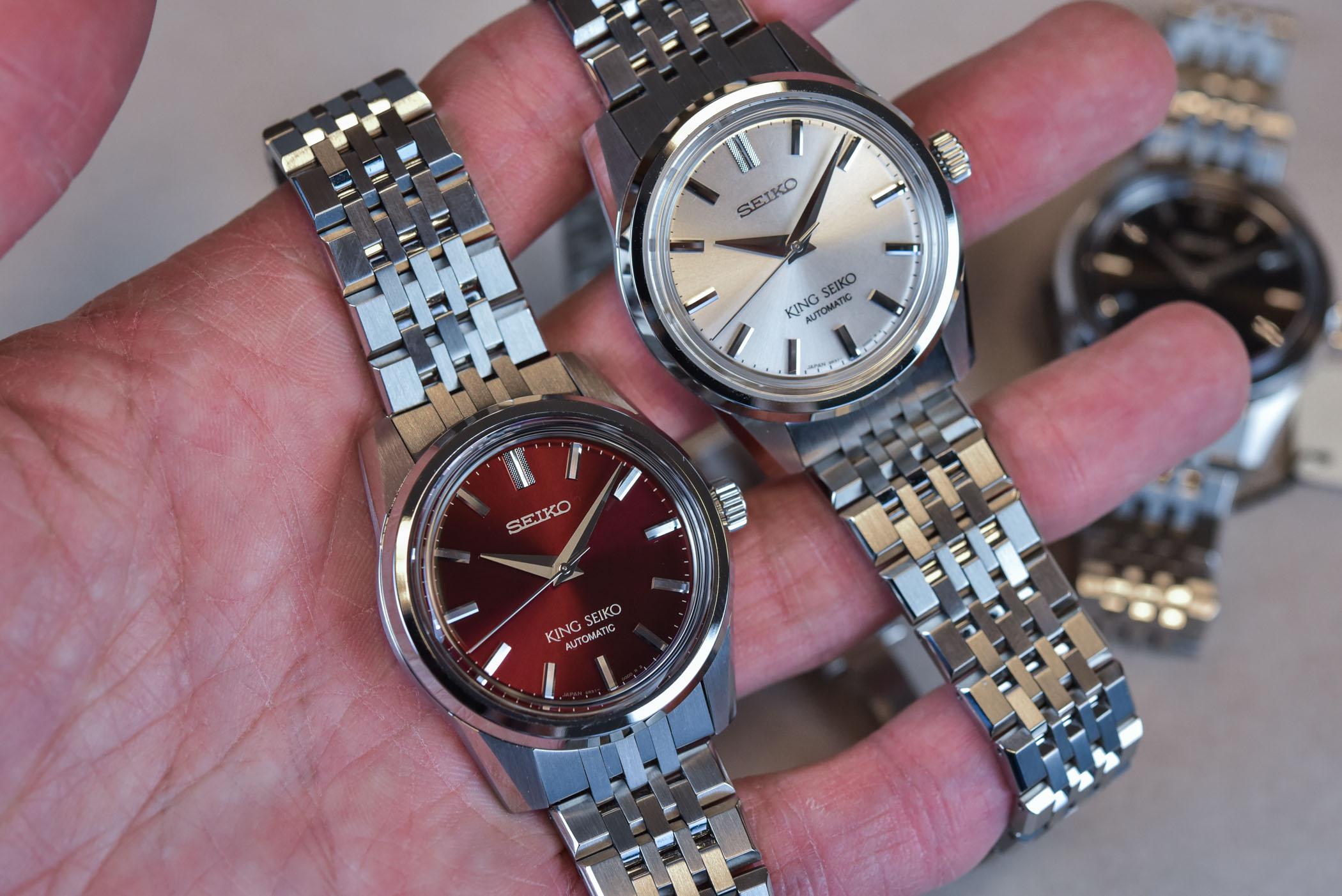 The new Seiko King Seiko Collection SPB279 (silver) and SPB287 (red)
.
Like various other brands, Seiko has often tried to establish a sub-branded range of watches in an attempt to target new audiences or present a substantially different style. By now, we’re all very familiar with Seiko, Grand Seiko and probably to a lesser extent; King Seiko. The fact this name returns in the permanent collection is a testament to the importance of King Seiko to the Seiko Corporation. Without it, the brand simply wouldn’t be where it is today.

As we’ve extensively explained in the hands-on review of the King Seiko KSK SJE083, both the Grand Seiko and King Seiko sub-brands are the result of the internal rivalry between the Daini Seikosha and Suwa Seikosha factories. We’ve said it then, and we’ll say it again; competition leads to a need to grow, evolve, rethink one’s purpose, and ultimately; change. 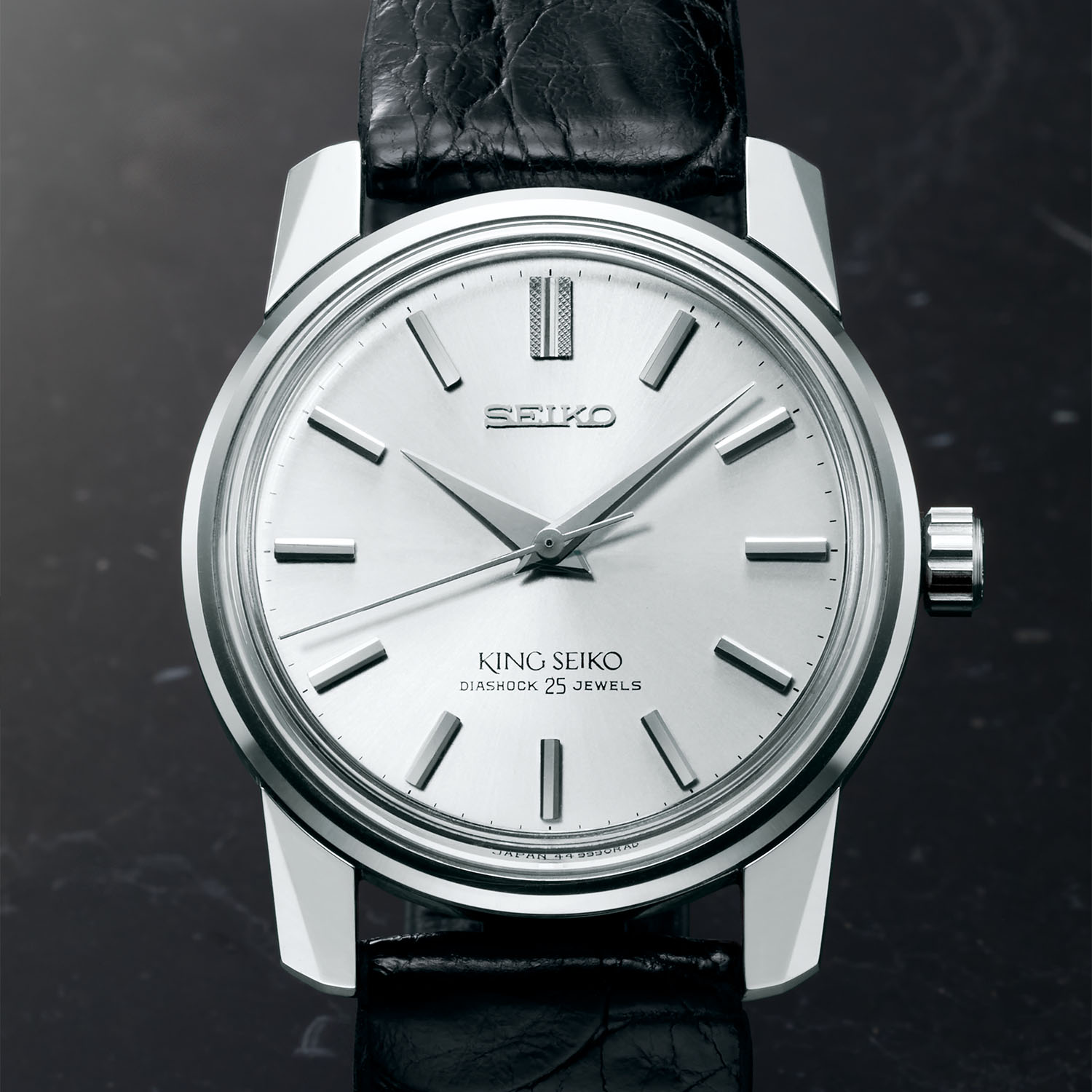 An example of the 1965 King Seiko KSK watch, with its calibre 44A

The first product to emerge from Seiko’s decision to put the Suwa Seikosha factory in charge of creating a luxurious, more precise type of wristwatch, was labelled Grand Seiko. A year later, and not to be deterred by Seiko’s aforementioned decision, the Daini Seikosha factory would present their own under the King Seiko name. 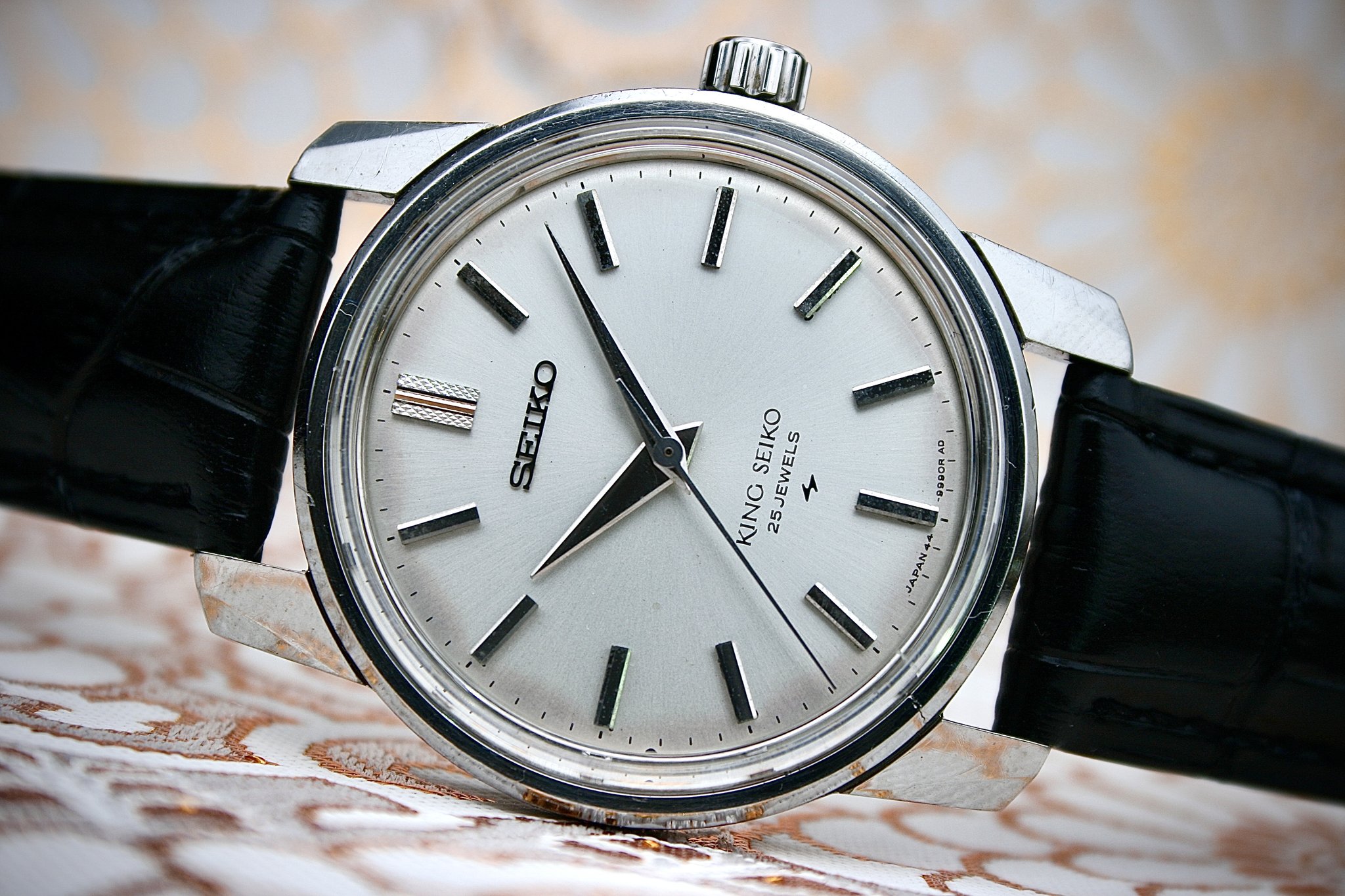 An example of vintage King Seiko 44-9990 – image by vintagegsks.com. Soon after, both would follow suit with the guidelines in design as determined by Taro Tanaka. Mr Tanaka set apart Seiko from the traditional (read; Swiss) style by defining a simple yet effective set of rules, the so-called “Grammar of Design”. In essence, this meant cases had to be shaped and finished free of distortion, bezels had to be simple, and hands had to be sharp and mainly flat. This is still very much part of Grand Seiko’s watchmaking ideology today and will go for King Seiko as well. 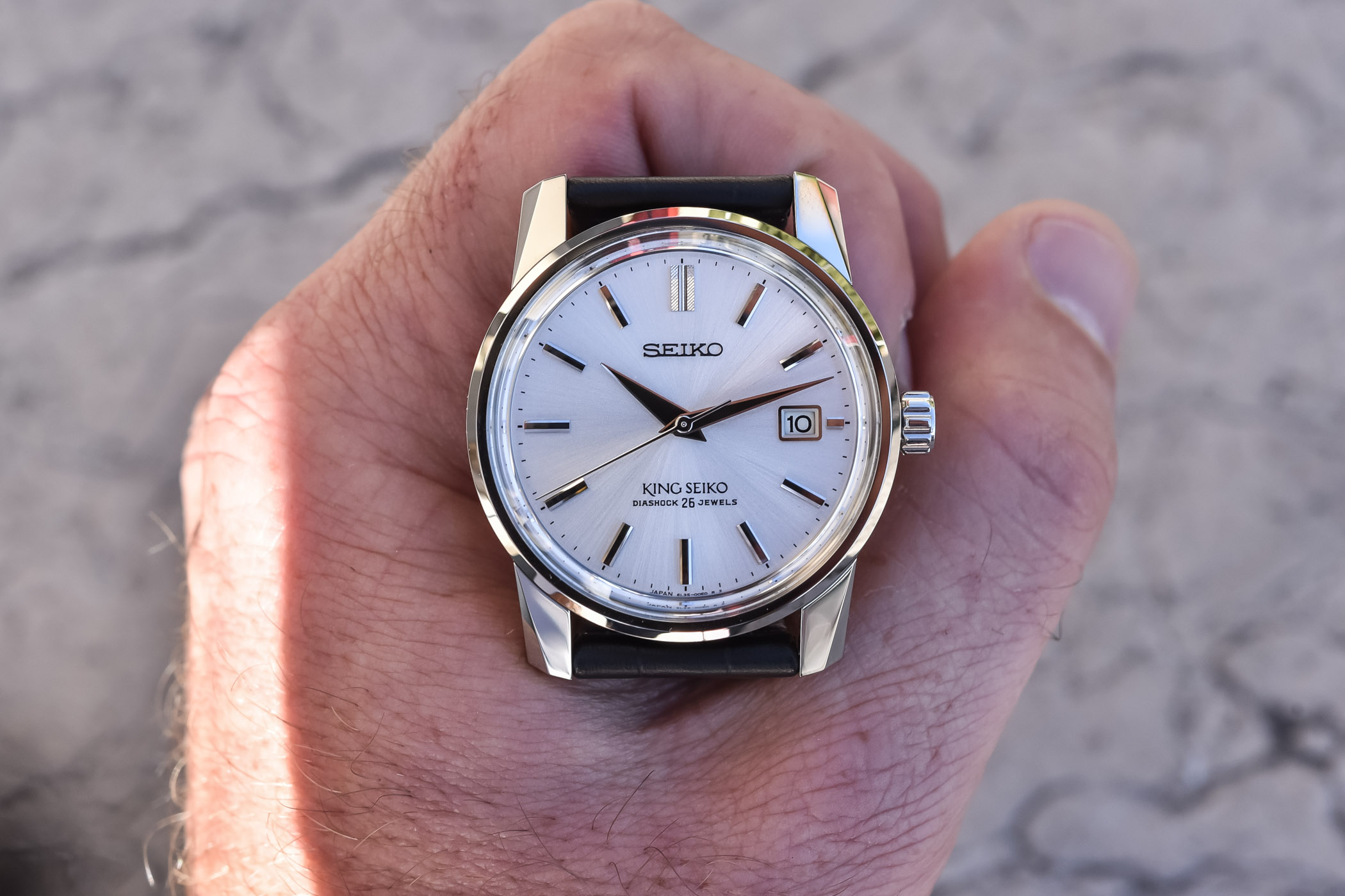 THE RETURN OF THE KING

The King Seiko KSK SJE083 Limited Edition from late 2020 was modelled directly after the 1965 King Seiko 44-9990 albeit in a slightly more modern execution. While the shape of the case and the overall look and feel very much has that distinct 1960s style, Seiko has taken a few liberties with the SJE083. Liberties that are now more or less corrected with this King Seiko collection. 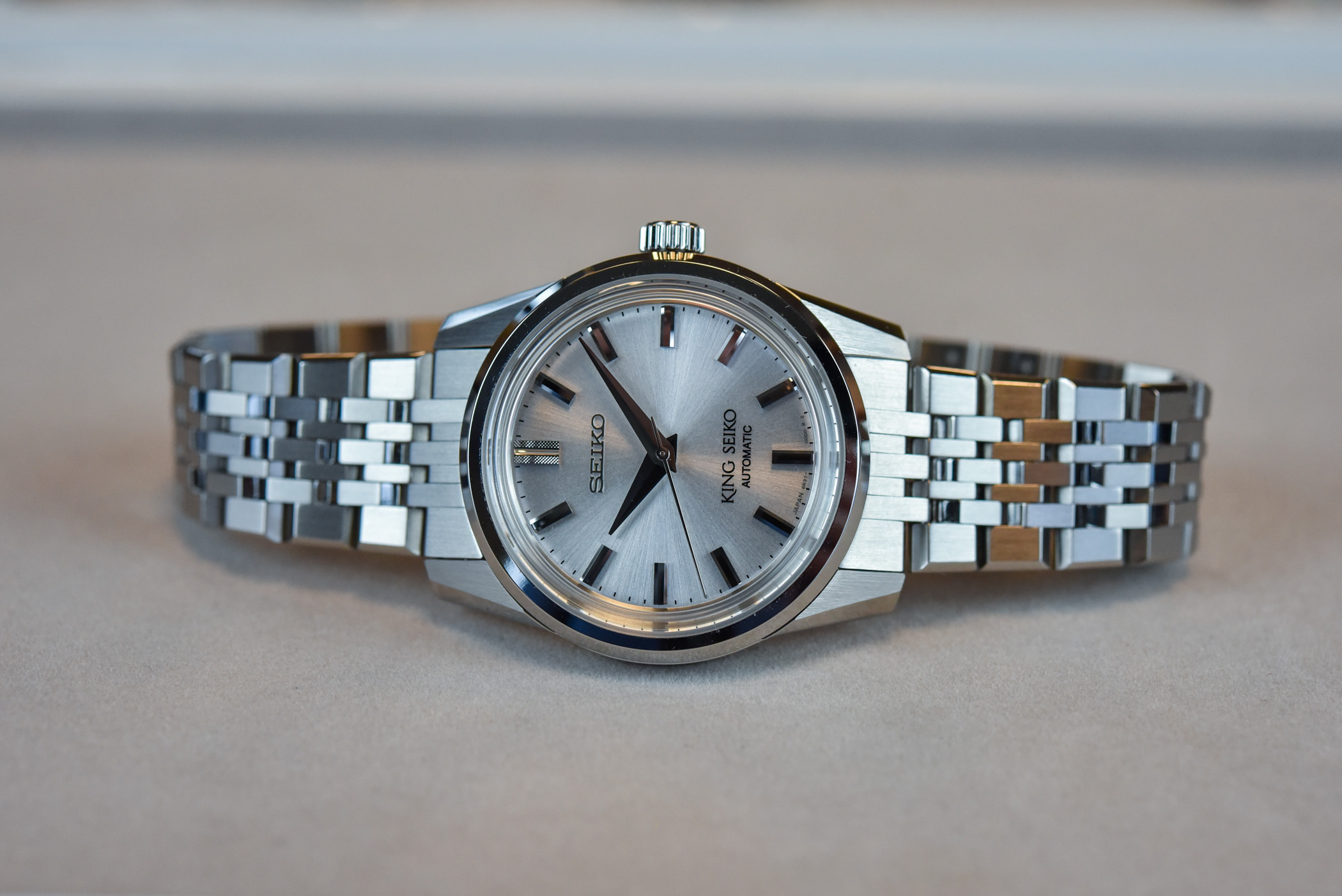 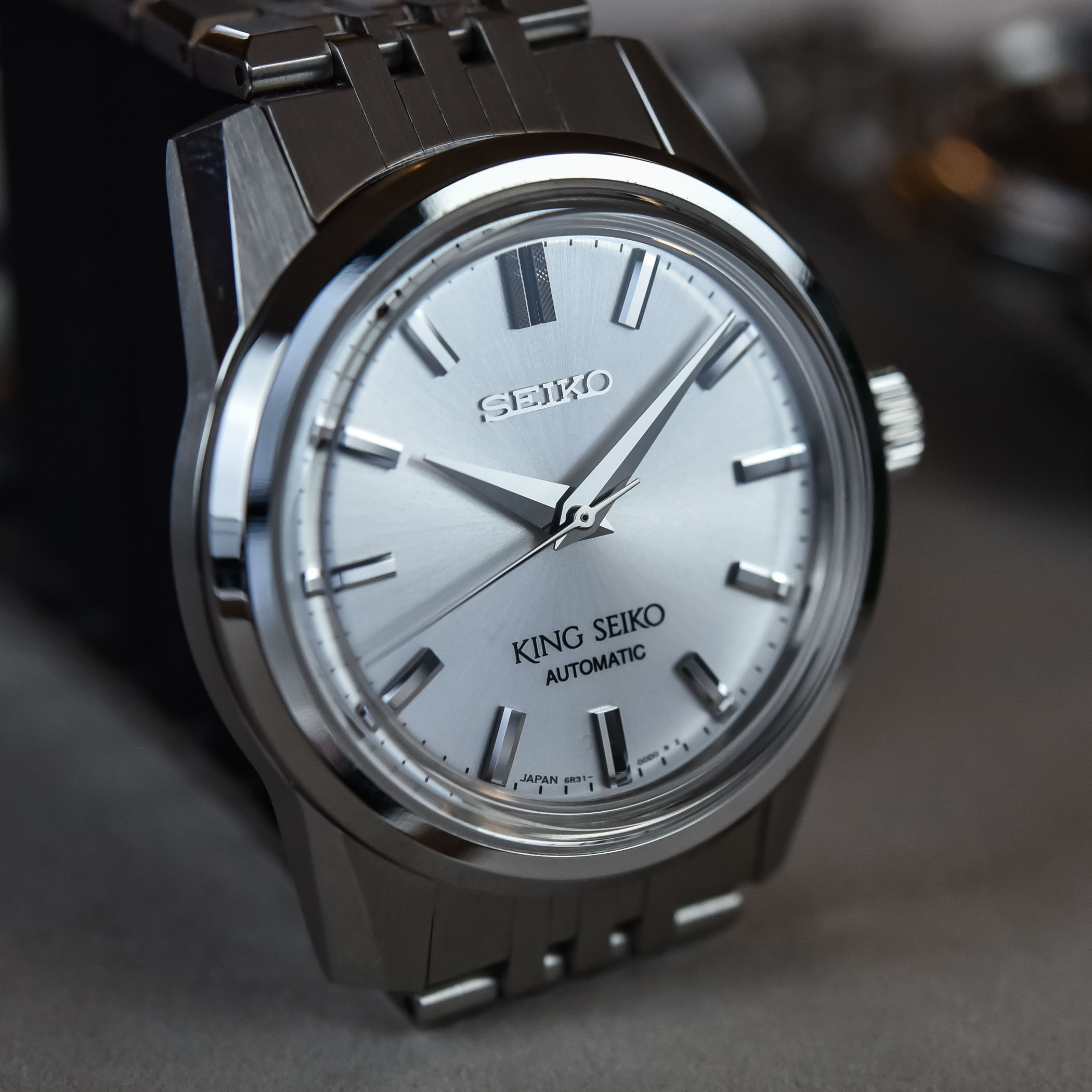 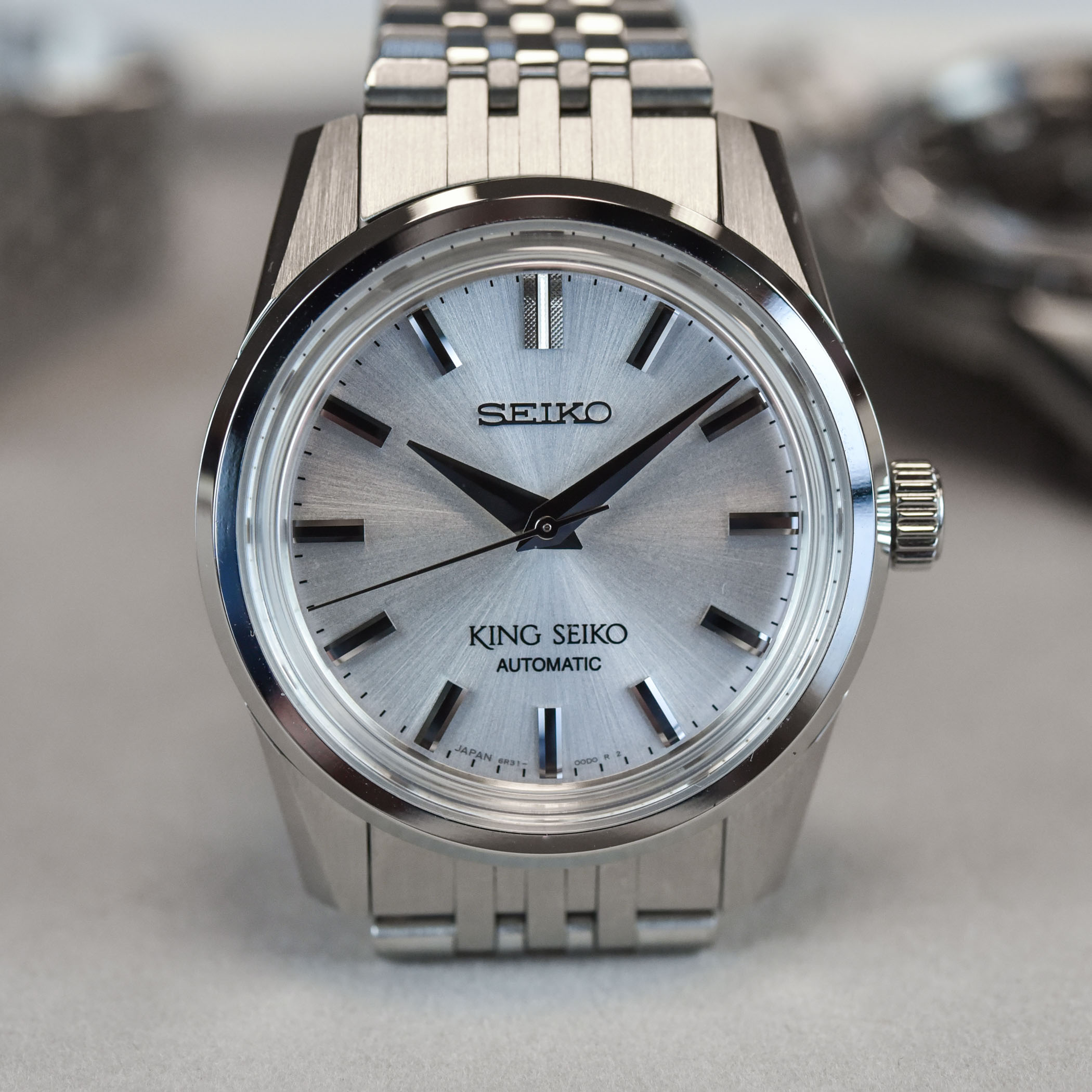 The new range comes in five references, all featuring a 37mm sized case very close to the original King Seiko 44-9990. The sharp and angular case, with a height of 12.1mm, looks almost exactly alike, with brushed and polished finishes. The faceted lugs, for instance, are directly taken from the 1965 model. The boxed sapphire crystal gives it that quintessential style of the 1960s. Both the crown and the caseback are finished with the King Seiko emblem that was introduced with the original one. 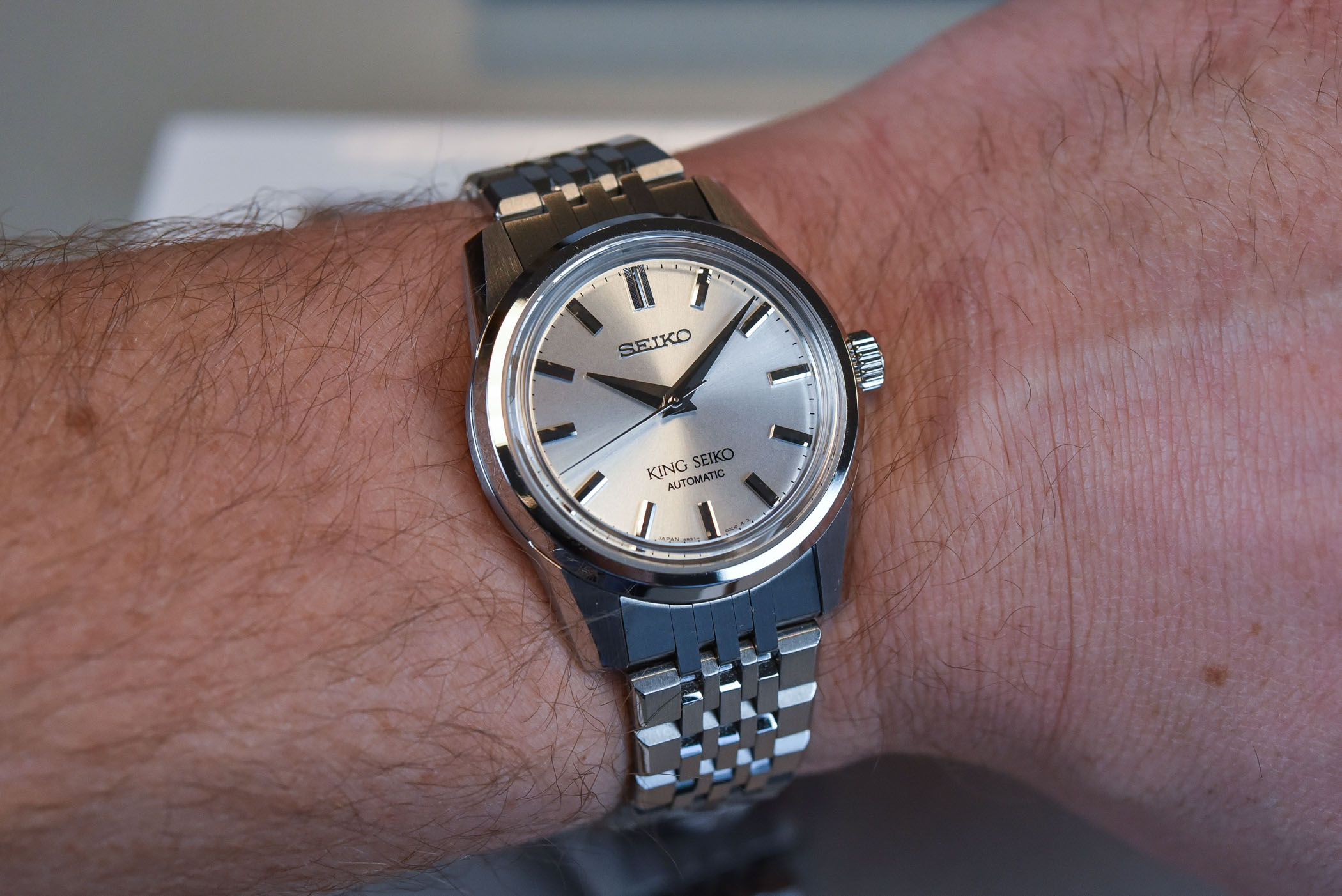 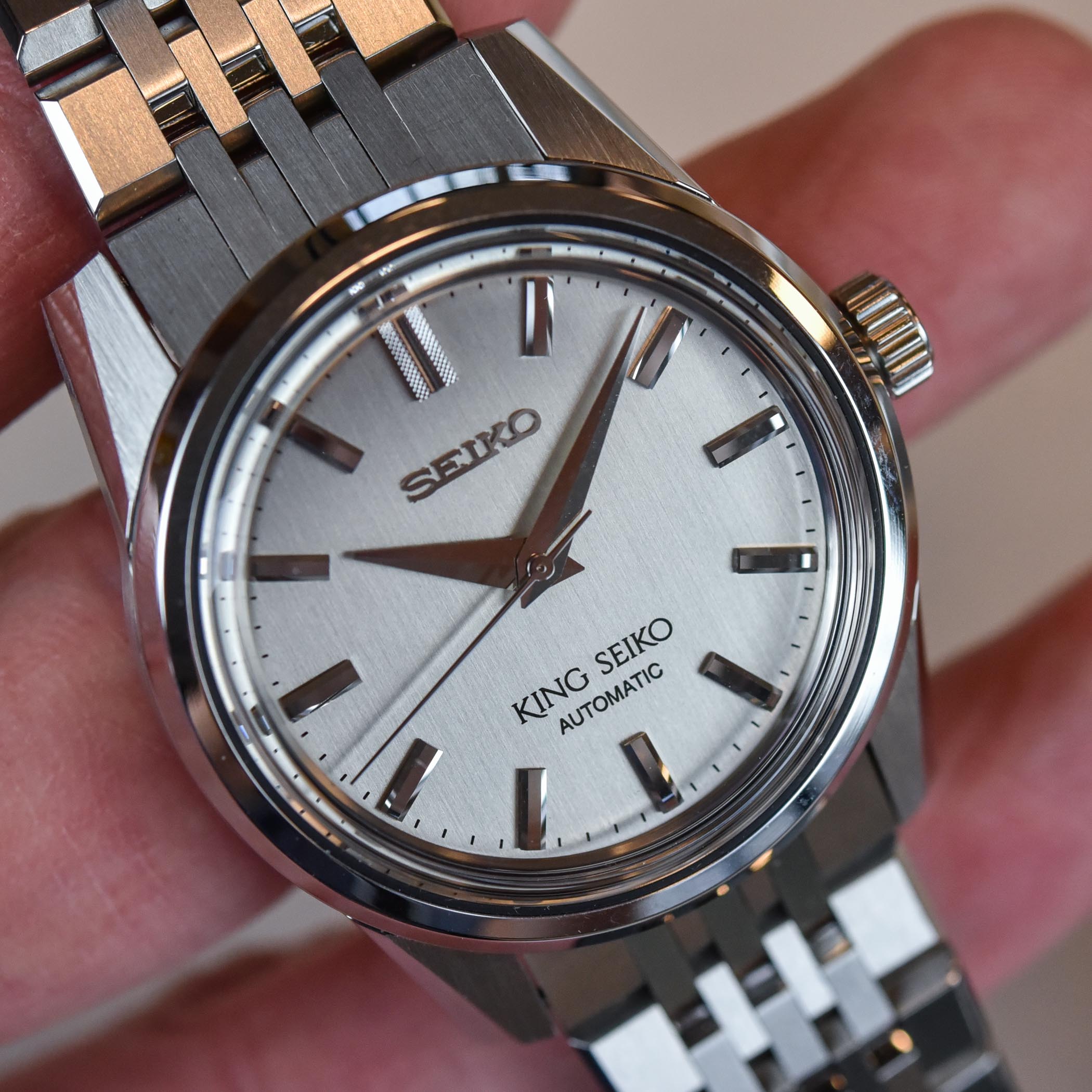 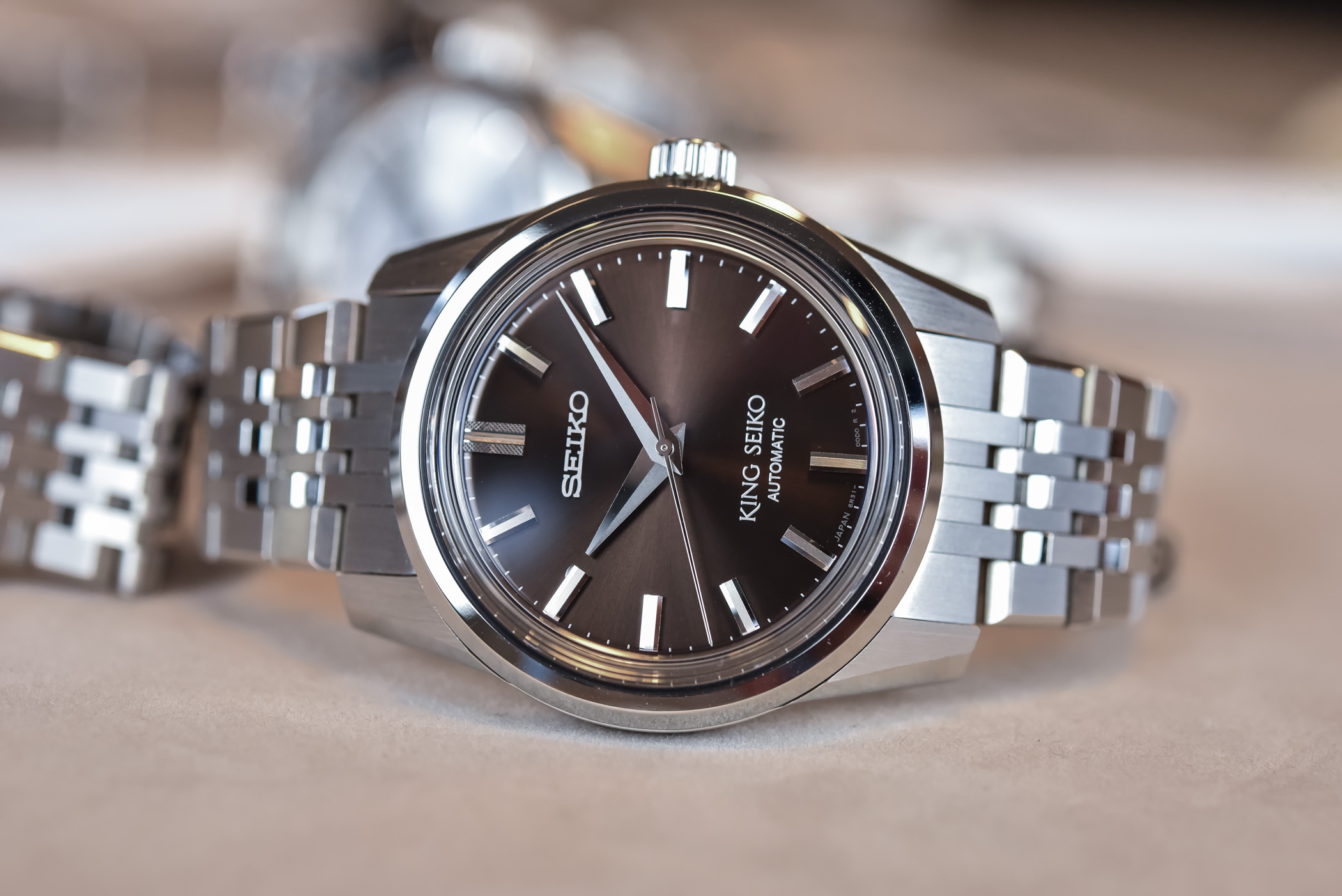 The King Seiko is introduced in five different dial colours, each bringing its own touch of flair. The most accurate one in relation to the 44-9990 is the silver dial with sunray brushing, which is reference SPB279. Next, there’s also a silver, or actually light-grey dial with straight brushing; the SBP281. And then there are three darker dials; charcoal grey (SPB283), brown (SPB285) or burgundy red (SPB287). All dials are finished with applied, polished indices. Just as the 44-9990, the marker at 12 is double the width of the rest, and given a fine pyramid-like pattern on the top surface. Just as its direct inspiration, it lacks a date indication and as such keeps the dial clean and balanced. In line with the “Grammar of Design”, the hour and minute hands are flat with a Zaratsu polished, faceted finish (without the high-end bevels found on the limited SJE083, however), and combined with a needle-like seconds hand. 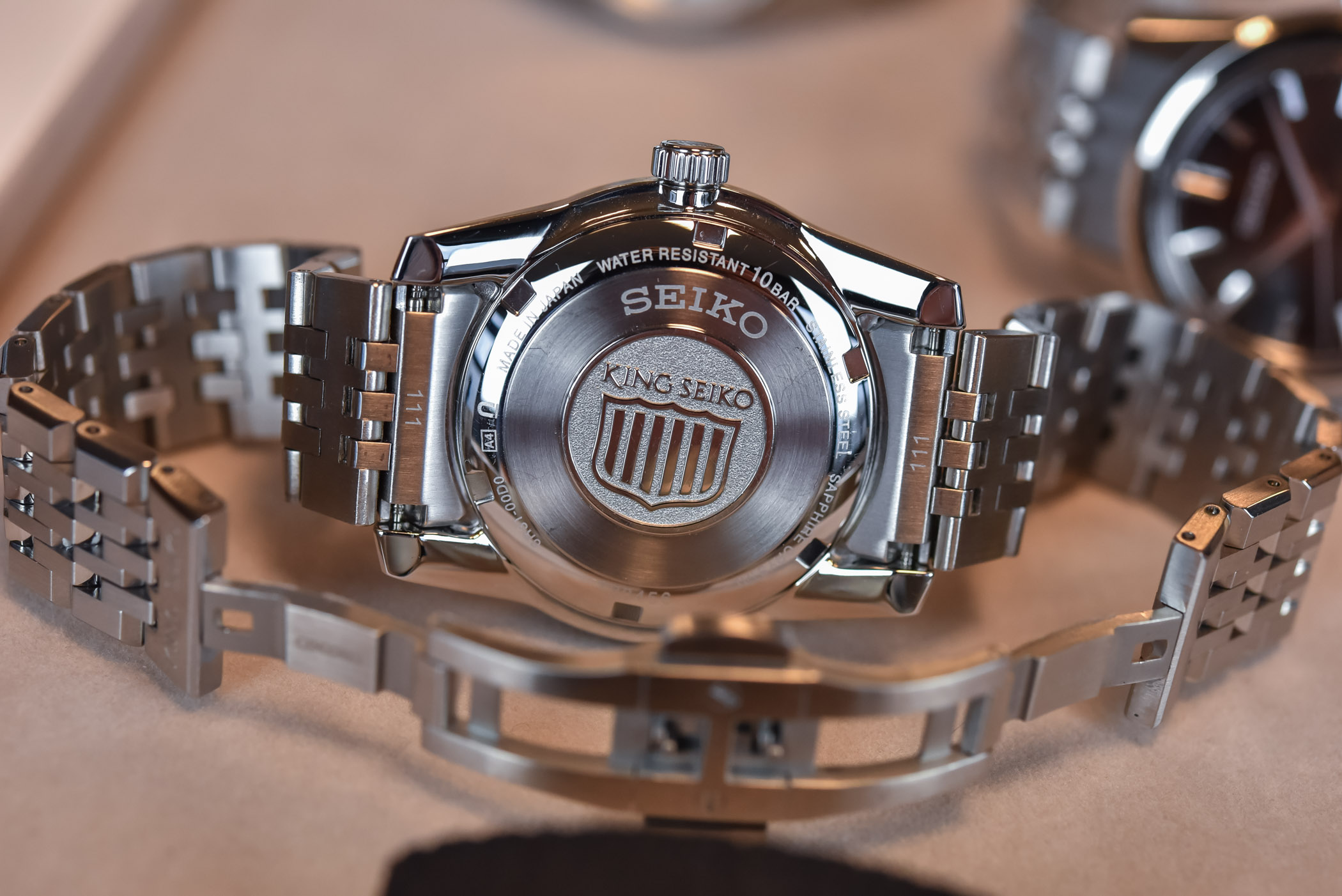 The King Seiko is outfitted with the in-house calibre 6R31, which is closely linked to the 6R35. Using the same mechanical architecture, the 6R31 uses 24 jewels and runs at a frequency of 21,600vph. The only difference between this and the 6R35 variant is the absence of the date indication, and as a result, the number of jewels is reduced by 2. The movement is accurate to run within +15/-25 seconds per day, just like its dated cousin, the 6R35.

To complete the very retro-like appeal of the new King Seiko collection, it comes on a stainless steel multi-link bracelet very much like the one on the original 1965 model. The faceted links, tapering from case to folding buckle have a brushed finish with polished bevels. As an alternative option, each reference is also supplied with vintage-styled leather straps with a pin buckle bearing the King Seiko name. 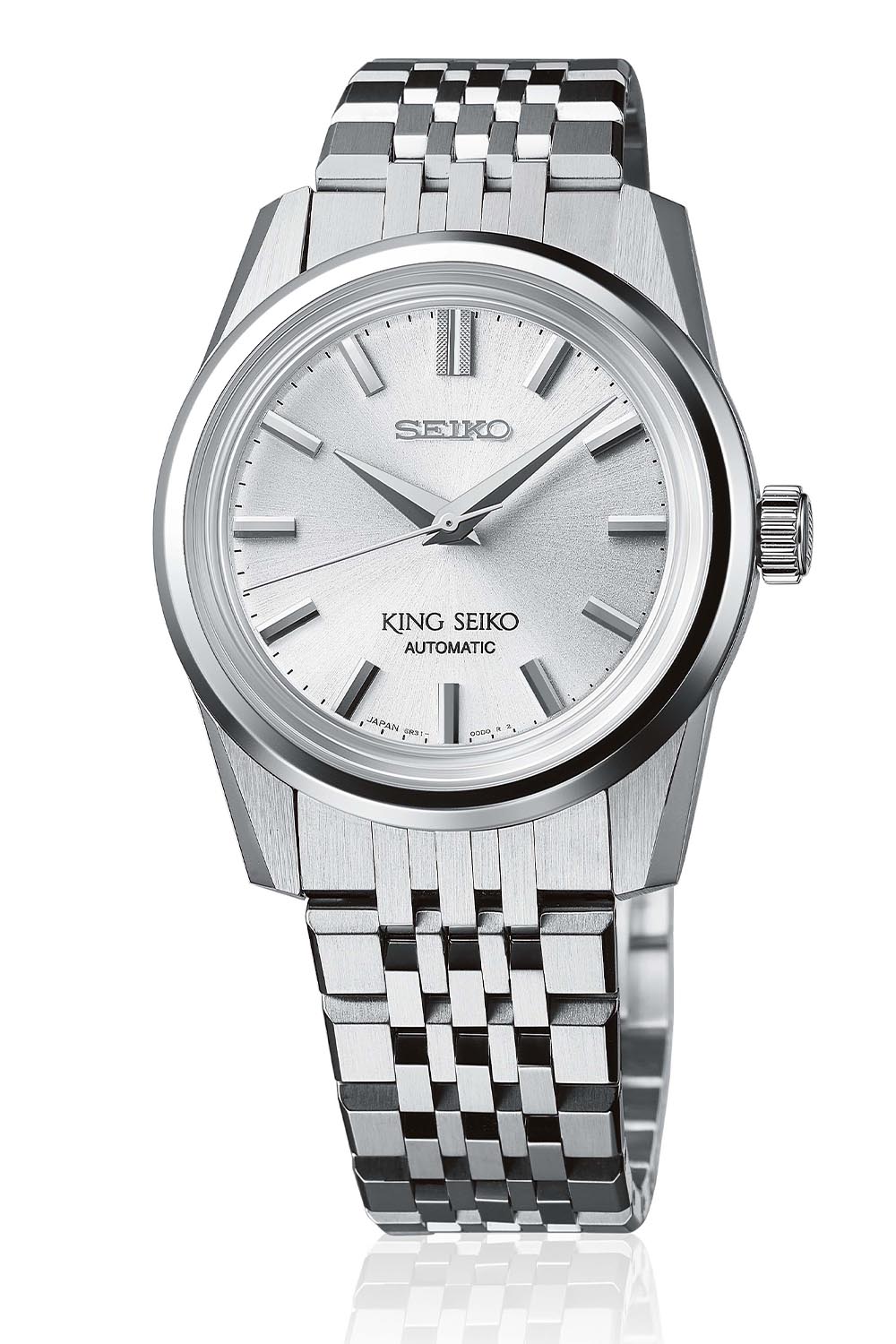 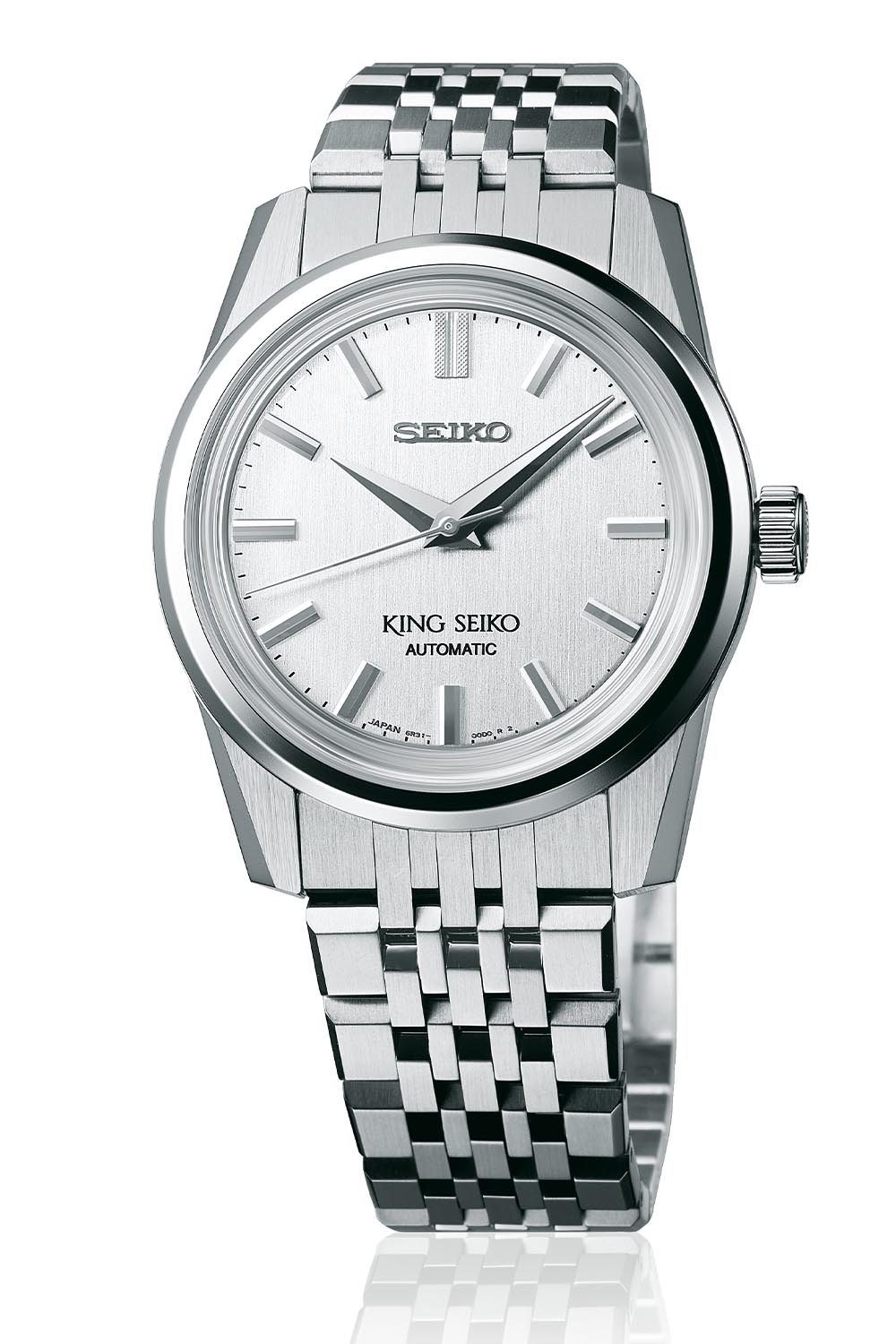 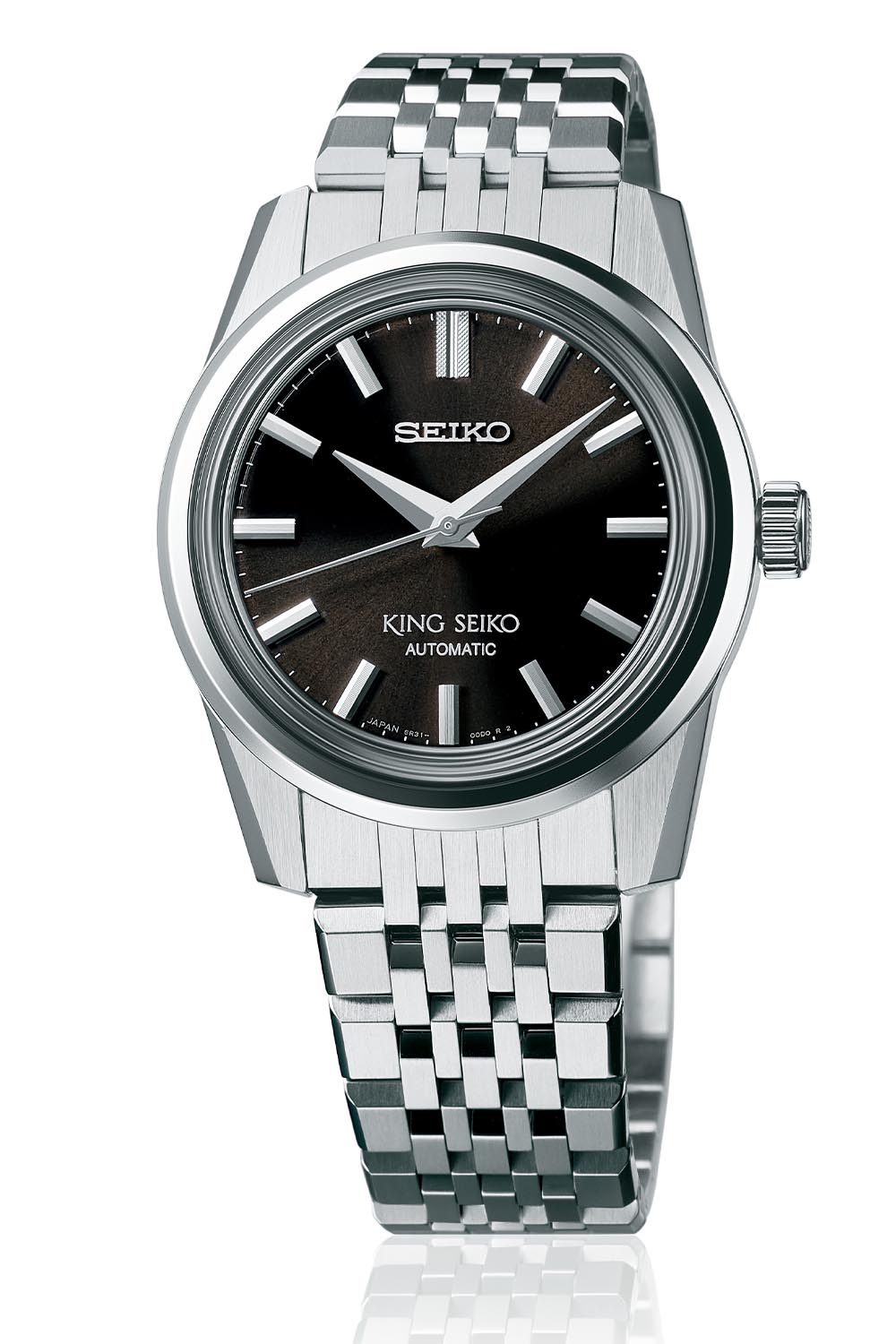 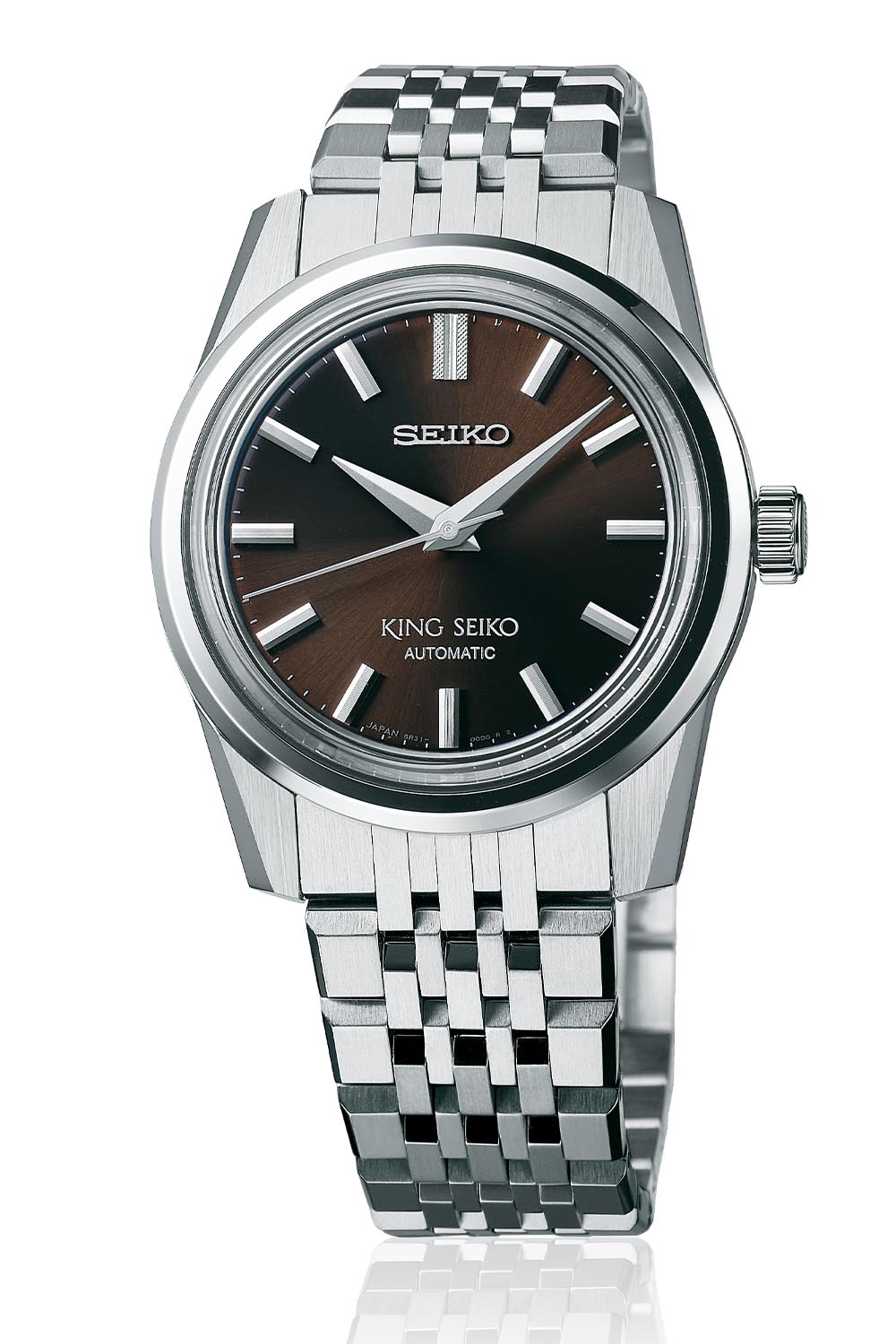 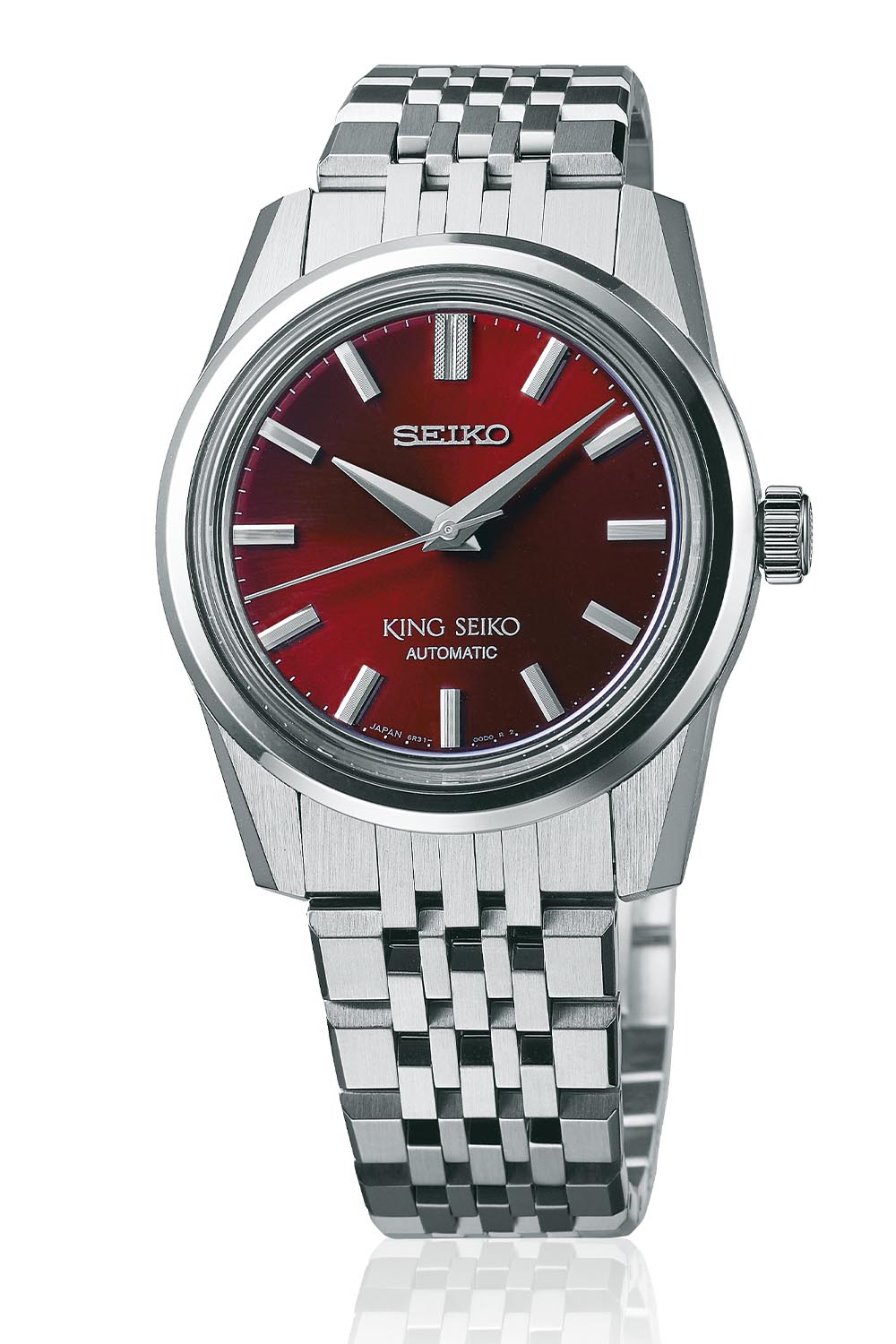 Where the King Seiko SJE083 was priced perhaps a bit steep, the new King Seiko collection retails for a more reasonable EUR 1,700. This puts it directly between the average top-end of Seiko, and below Grand Seiko’s entry-level models.

Simply put, we love the fact Seiko has brought the King Seiko philosophy back from the past. And to do it in such a faithful and respectful way is all the more reason to be excited. Even on a wrist as big as our editor, Robin has (19cm in circumference) the 37mm sized case looks well proportioned. The dials are fun and offer a nice variety of colours. Go for the traditional silver one of the original, or a more daring burgundy red, and you will not be disappointed. 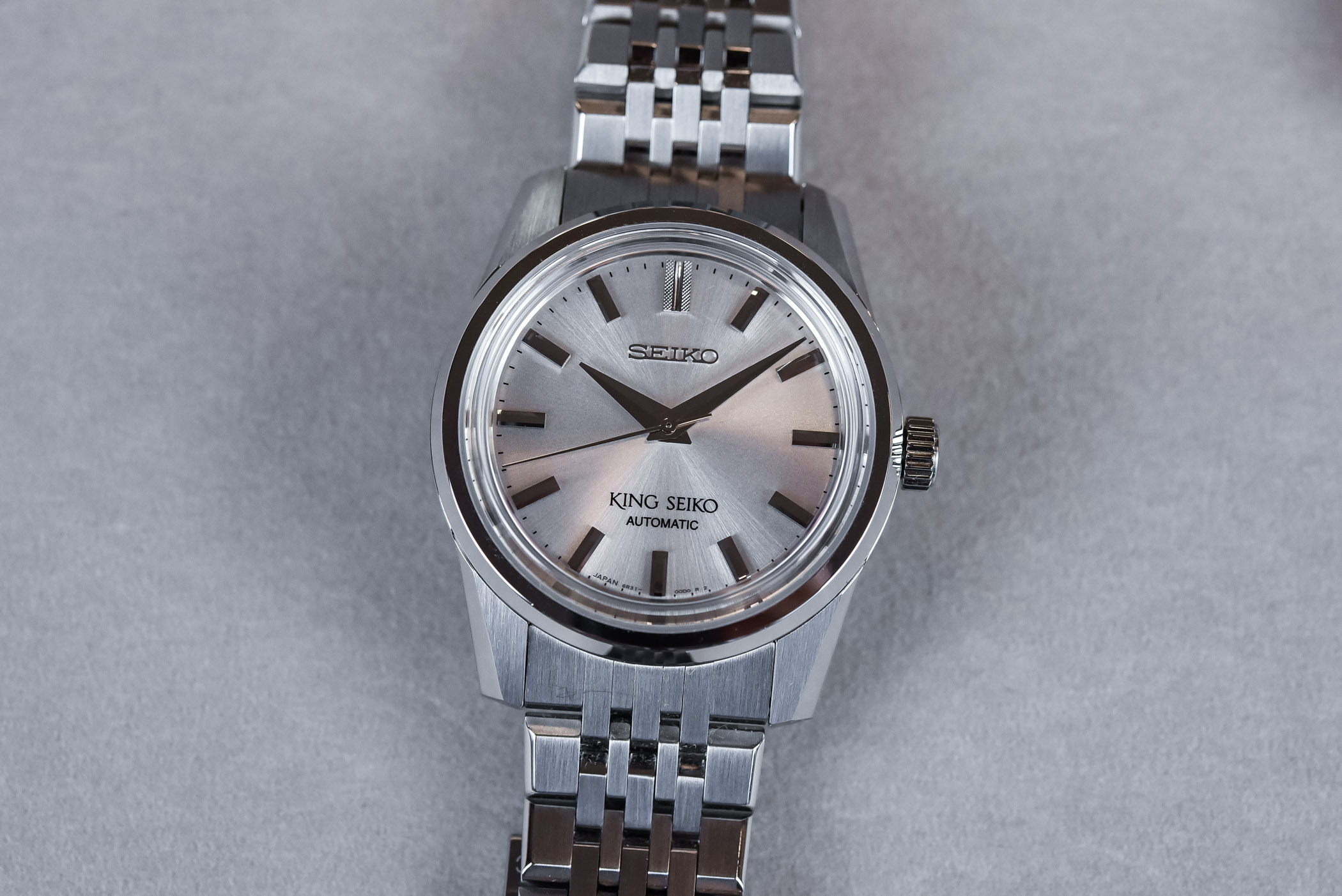 The only slight complaint we have regards the accuracy of the automatic movement… As King Seiko, much like Grand Seiko, stems from the idea to build the best and most precise watch possible, the precision of the Calibre 6R31 is a bit of a let-down. Running within +25/-15 seconds per day simply means there’s a lot of room for improvement there. Other than that; very well done Seiko! Long live the King!