In 1983, a Citizen Challenge Diver from 1977 was recovered from an Australian beach. The watch was covered in barnacles, indicating it had been underwater for quite a few years, as these slowly build up over time. Surprisingly, it was still in running condition as the movement was shielded from water and dirt by its case. This fascinating little story serves as inspiration for Citizen's latest dive watch, the Promaster Mechanical Diver 200M NB6021, which comes with modern tech and materials. 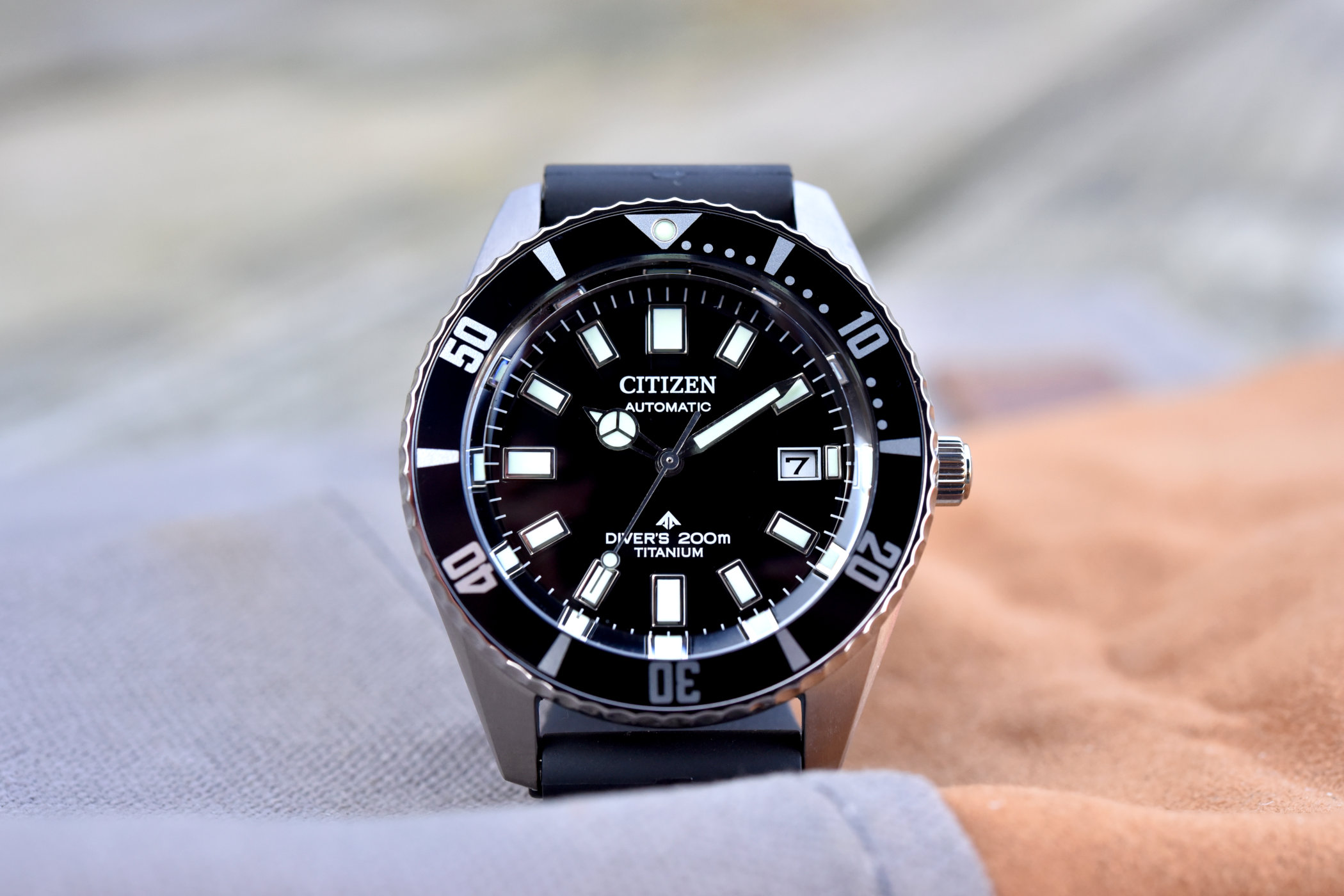 Pulling any watch out of the ocean and still finding it to be running after a couple of years in one of the harshest environments imaginable, is a testament to its construction. Naturally, that’s what divers are intended to be able to withstand in the first place, but mostly for short periods of time only. Being underwater for years on end is something watches are just not supposed to do, so kudos to Citizen for building a watch as far back as 1977 that could. 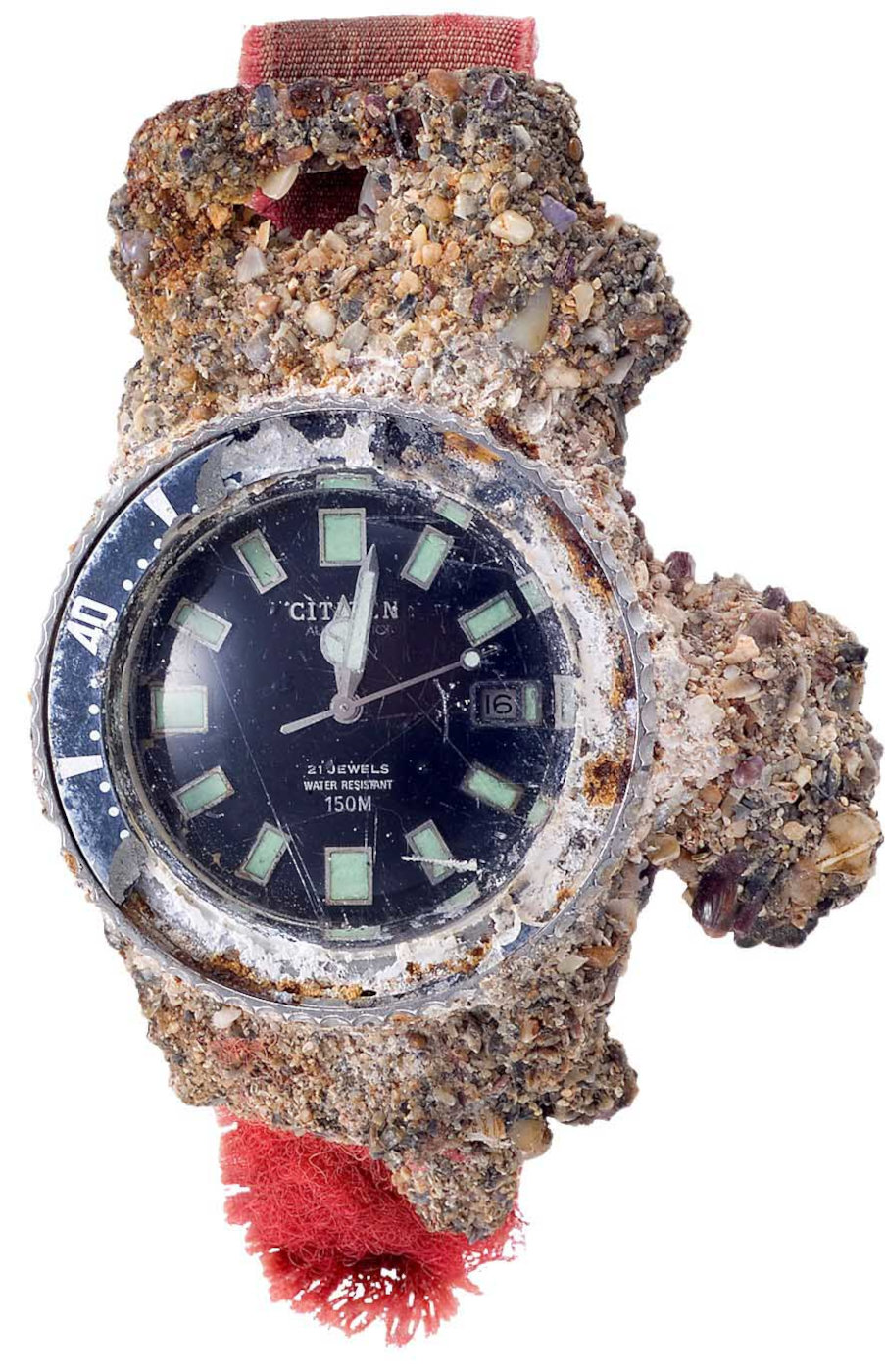 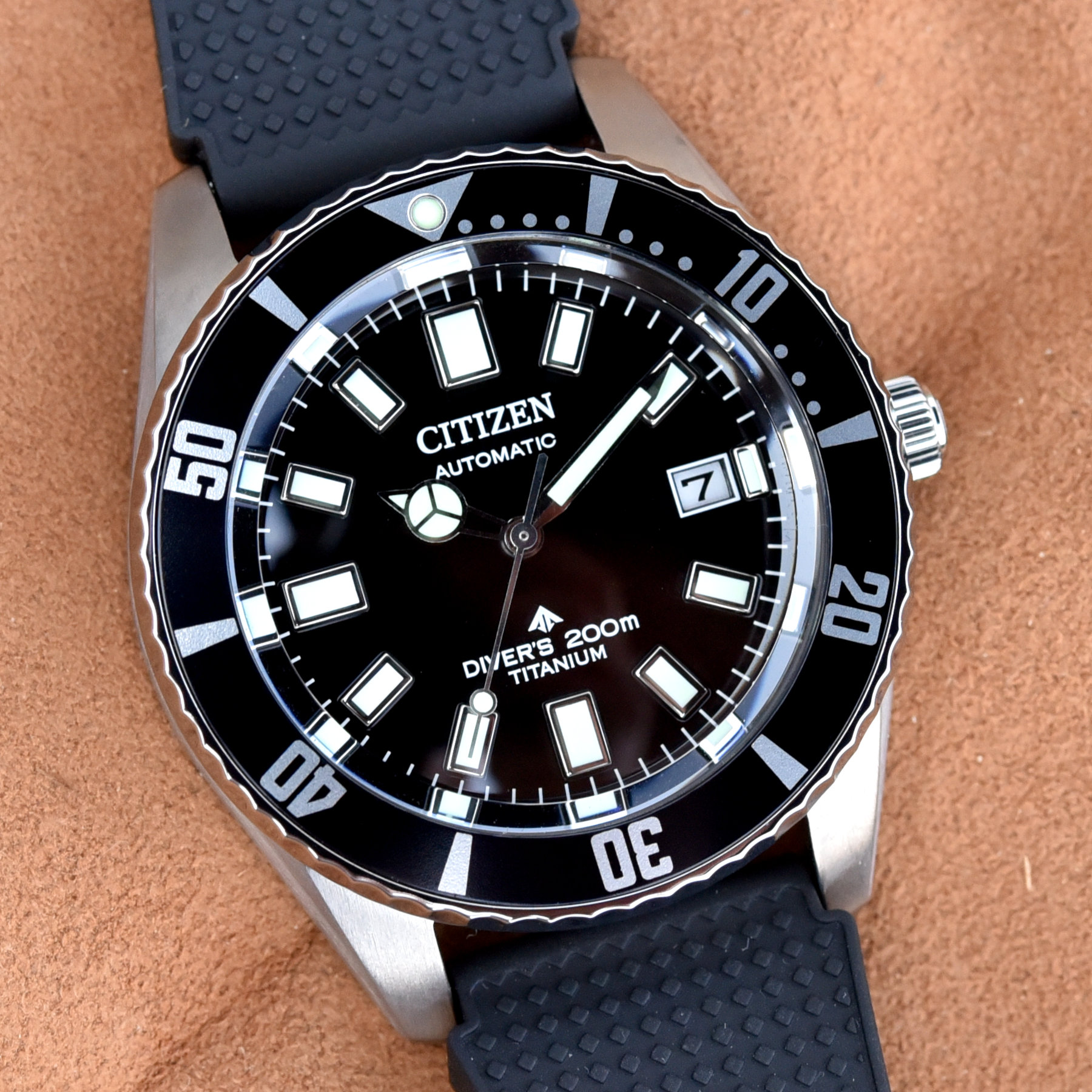 It also serves as the backstory, and inspiration behind Citizen’s latest, the Promaster Mechanical Diver 200M NB6021. This pair of humble little divers is modelled after the Challenge Diver from 1977, as found on that Aussie beach. Hence, it has a pleasent retro-look and modest dimensions similar to the original. It has been updated in key areas though, with modern tech and materials, a slightly reduced height and is ISO 6425 compliant. 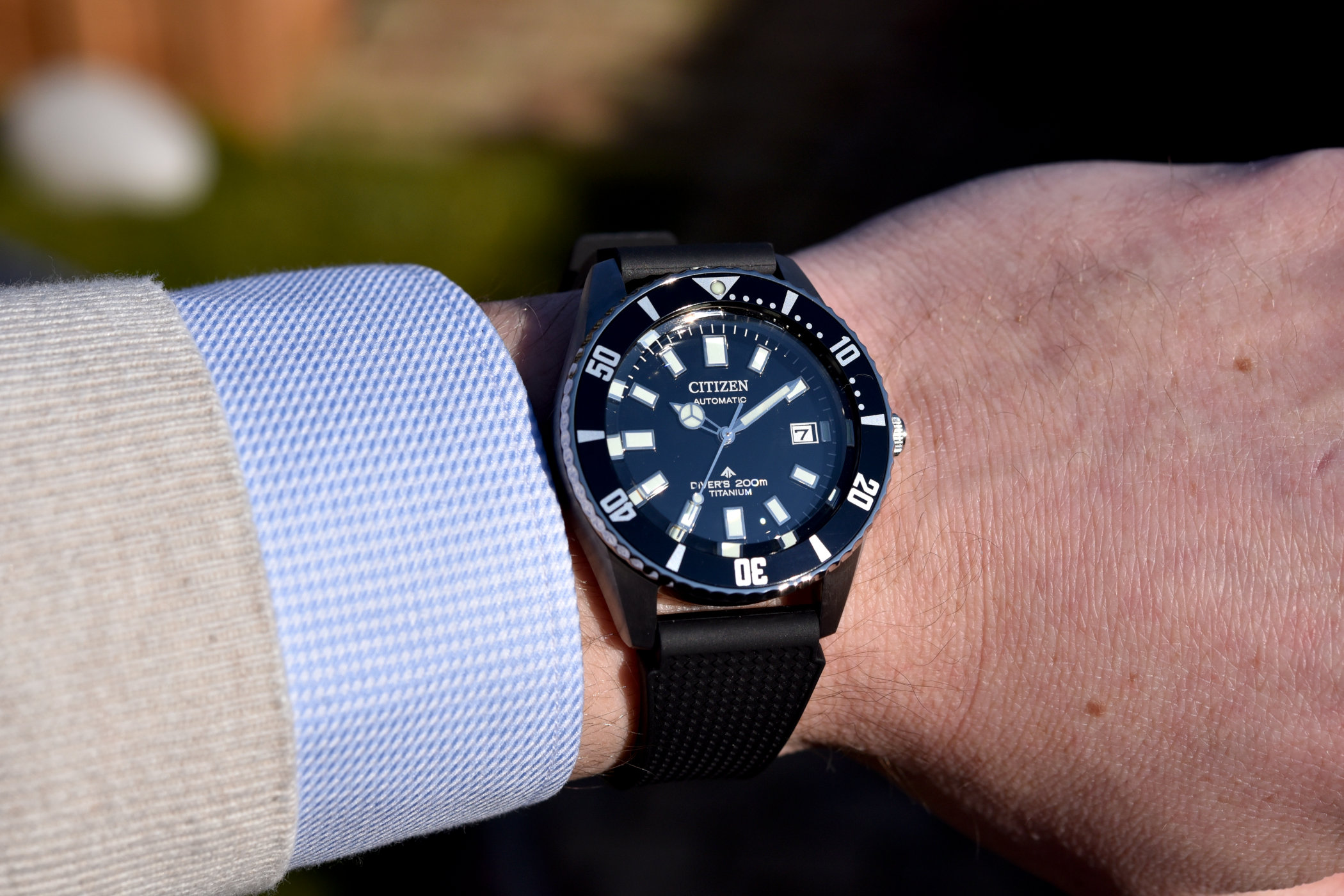 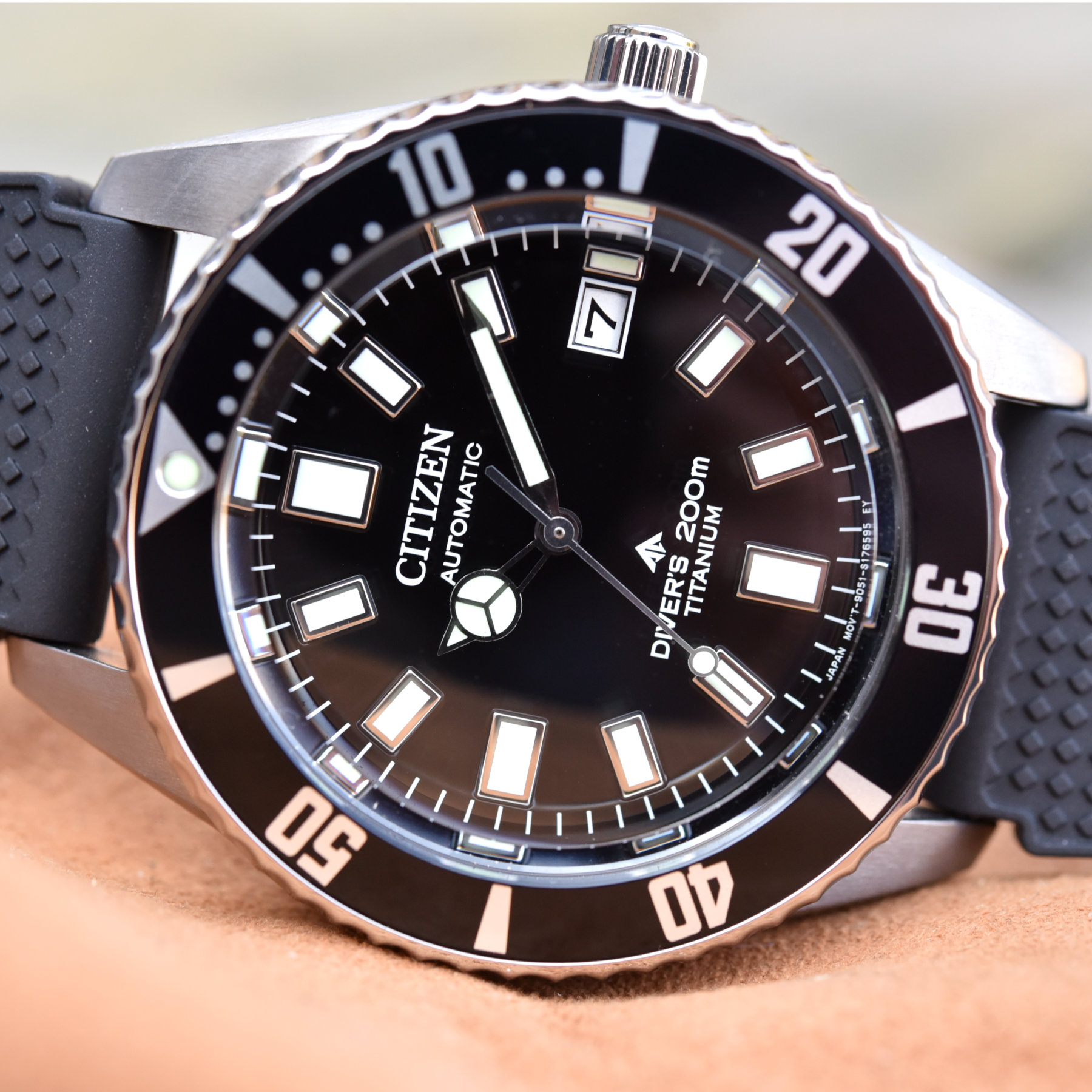 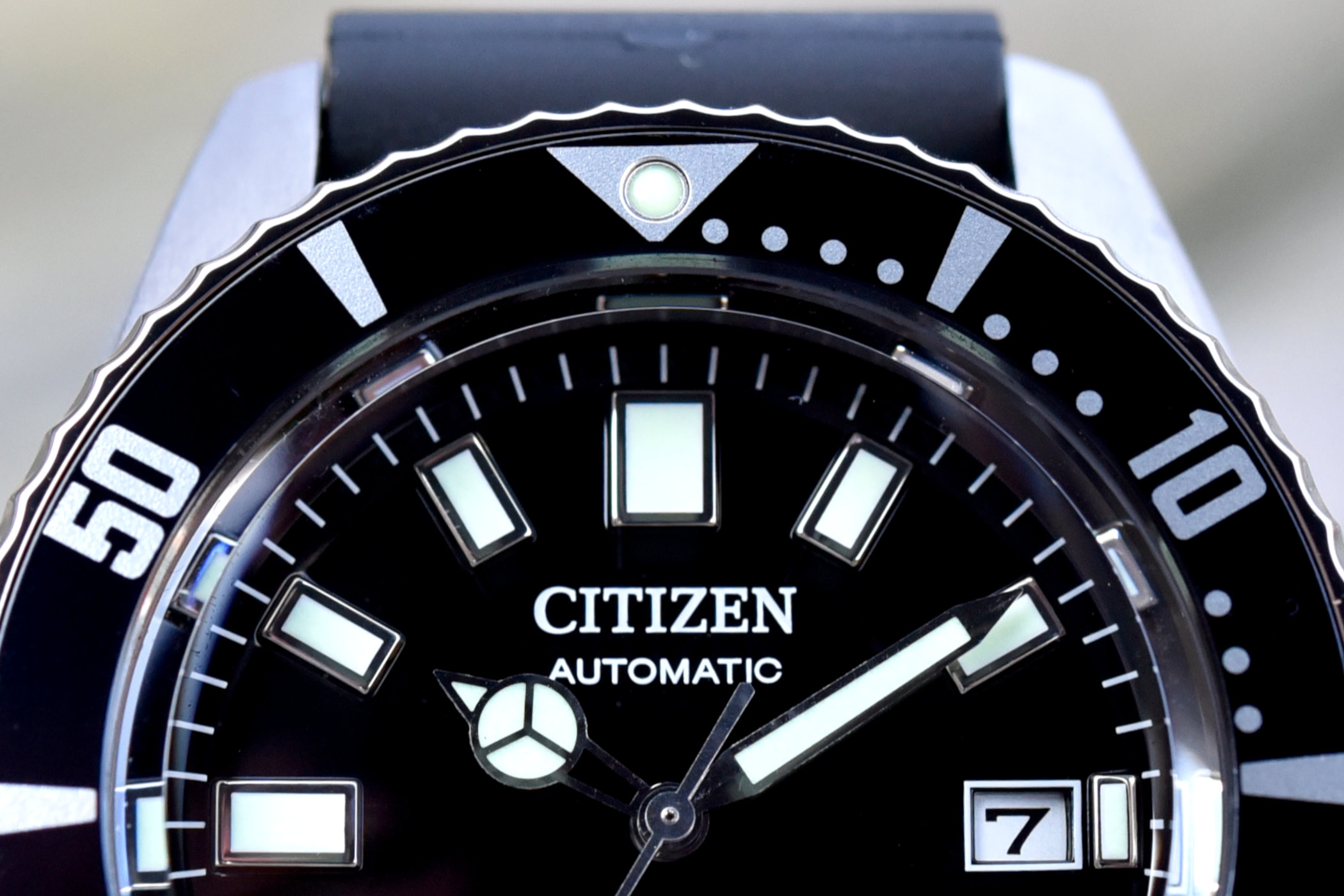 The new Citizen Promaster Mechanical Diver 200M is fully made of Super Titanium, something Citizen knows how to do very well. The lightweight material is treated with the brand’s proprietary Duratect hardening technology to create an ultra-resilient, scratch-resistant surface. Citizen was the first manufacturer to produce a commercially available watch made in titanium, back in 1970. This was at a time when the material was primarily being used in space and aeronautical industries. Over the years, Citizen’s expertise led to the introduction of Super Titanium, a registered trademark combining the brand’s titanium processing technologies and Duratect surface hardening process. 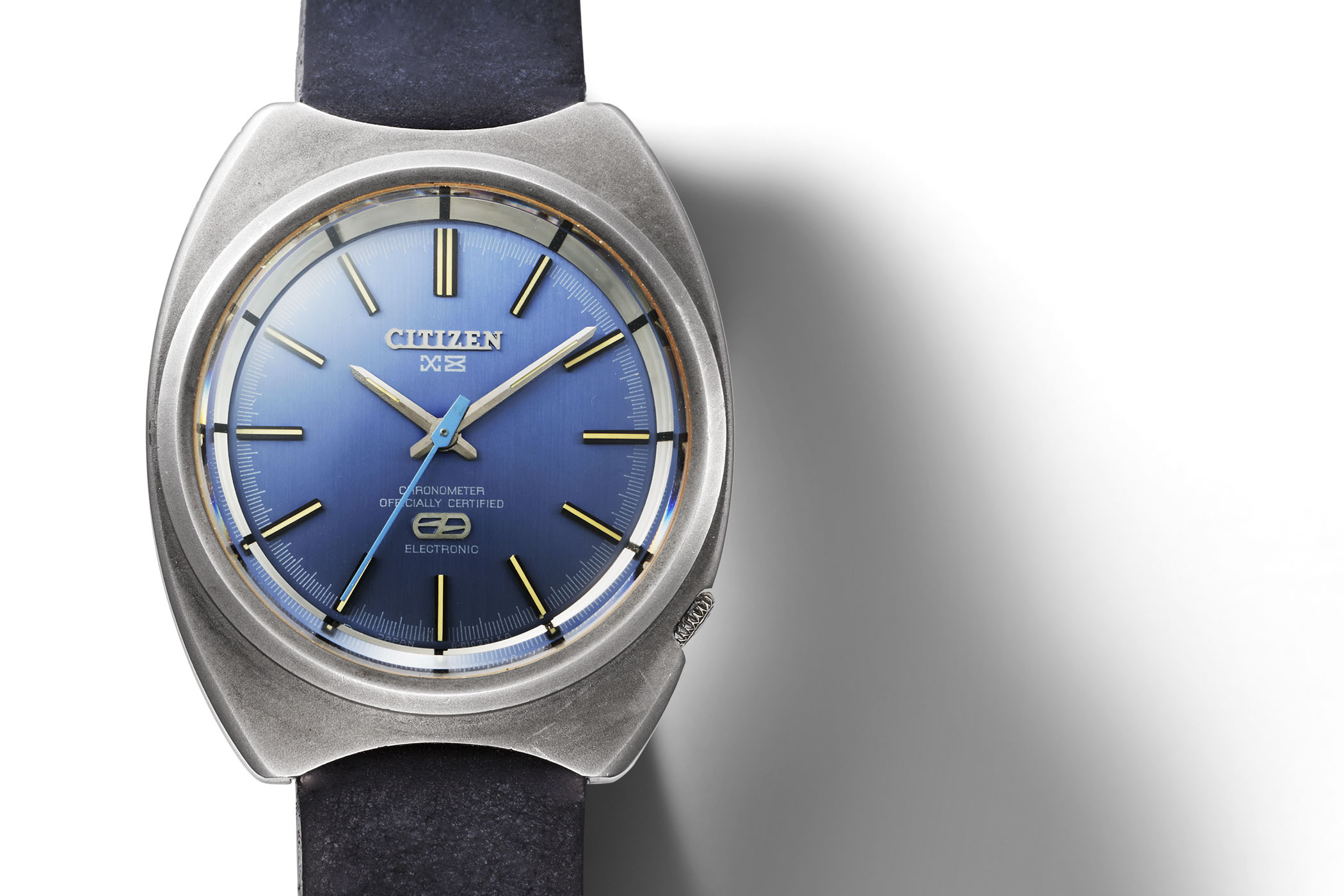 The case measures a reasonable 41mm in diameter and 12,3mm in height. The way it’s constructed it seems like the bezel is slightly wider than the middle case, but both have the exact same width. It does provide for an interesting visual appeal, further enhanced by the brushed finishing on the case and the polished outer surface of the bezel. This has a black or blue insert with a crisp silver 60-minute diving scale and a luminous pip inside the triangular indicator. It grips easily and turns with a reassuring feel and a smooth “click”. Its alignment is spot-on, something that matters a great deal in a tool that could potentially save your life. 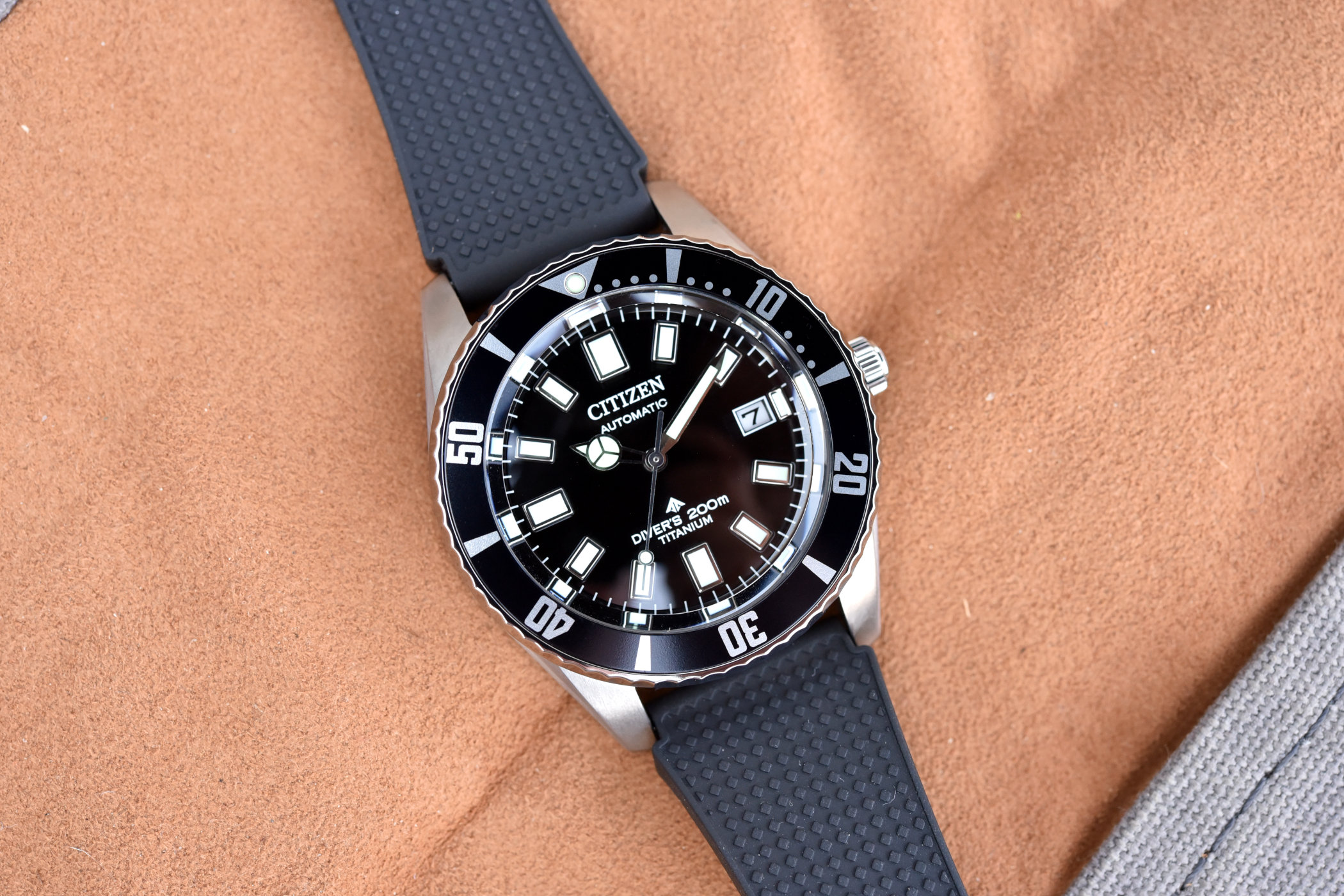 The dial comes in either black or blue, with embossed rectangular indices. Each is filled with a good dose of luminous material in a retro green hue. It has quite a strong glow, which can be seen during the day as well when properly charged by direct sunlight. Time is indicated by a Mercedes-style hour hand, a sword-shaped minute hand and a lollipop seconds hand. Again, all are treated with the same green glowing luminous material. It’s covered with a flat-top sapphire crystal, with a bevelled edge and a domed underside. The date window cuts into the 3 o’clock index and is outlined in white. 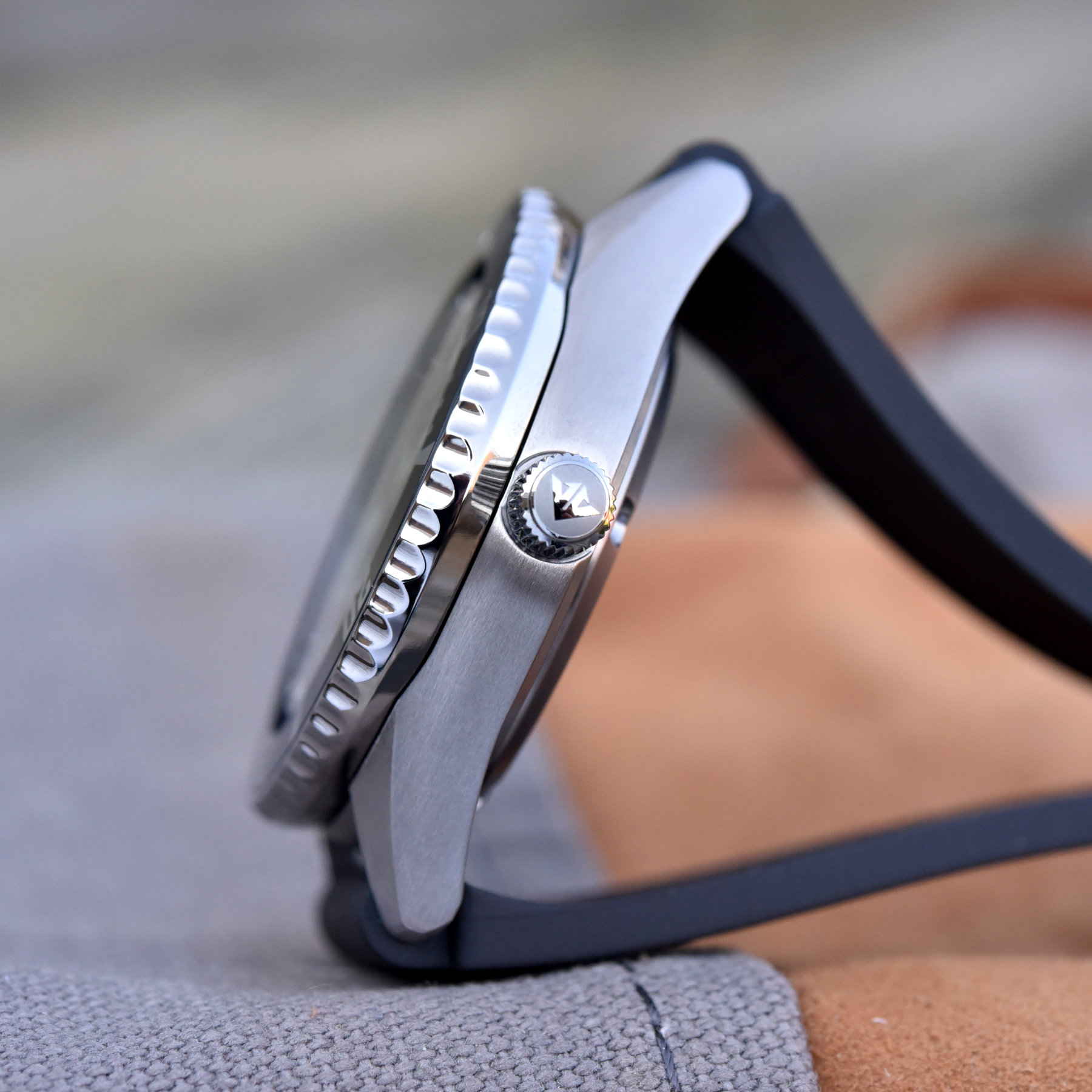 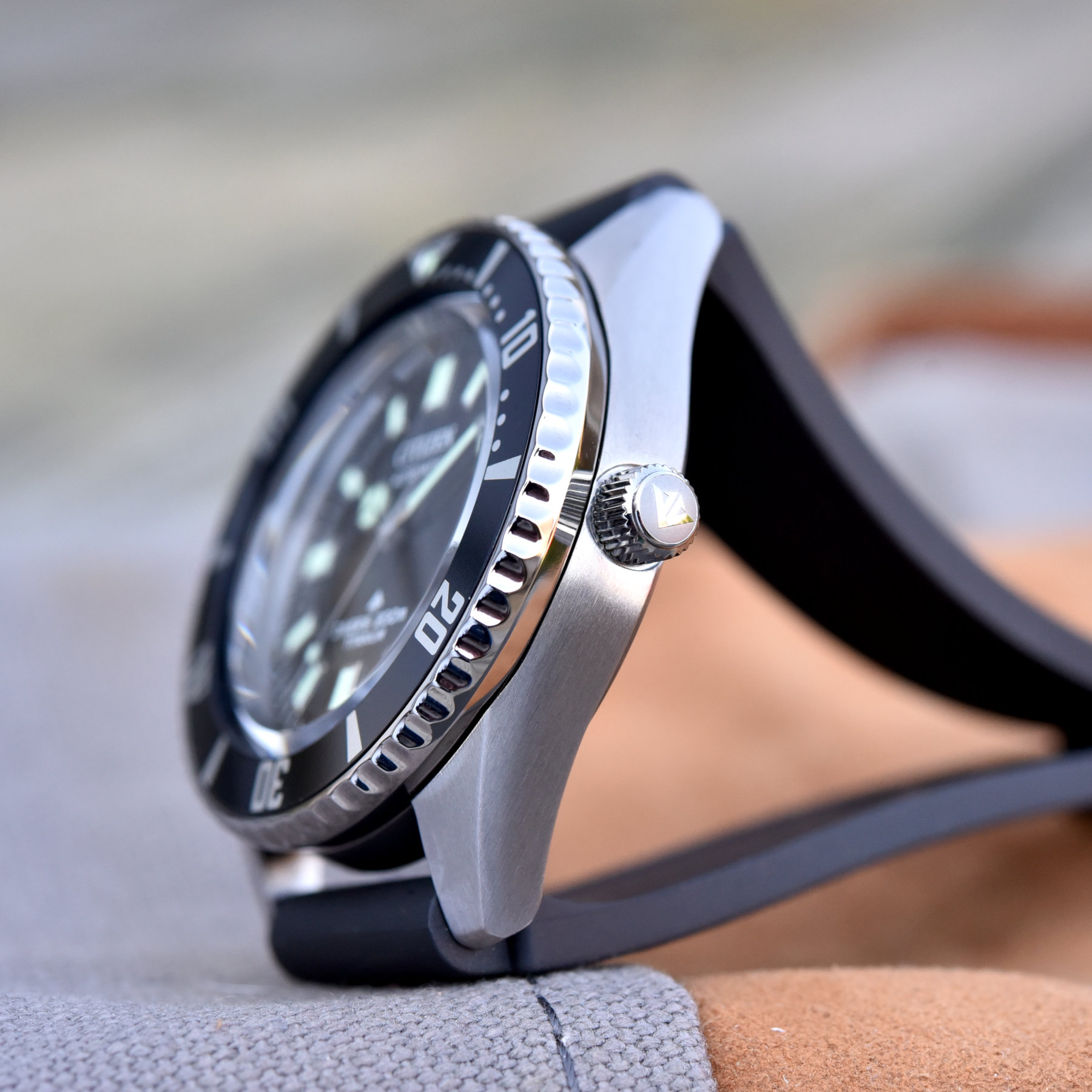 Power comes from Citizen’s in-house produced Calibre 9051, which we’ve already seen in the Promaster Mechanical Diver 200M NB6004 and the Series 8 831 Mechanical NB6010 and NB6012. This automatic movement runs at a frequency of 28,800vph and uses 24 jewels. It offers a decent 42h power reserve and is regulated to run within -10 to +20 seconds of deviation per day. As we’ve learned before, this movement is anti-magnetic to fields up to 16,000A/m (approx. 200 Gauss) as close as 1cm away, which is certainly reassuring. The movement is hidden from view by a solid titanium caseback.

The Citizen Promaster Mechanical Diver 200M NB6021 is presented with two strap options. The black dial (ref NB6021-17E) is available on a black rubber strap with a waffle-like embossing and titanium pin buckle. The blue dial version (ref. NB6021-68L) comes on a Super Titanium three-link bracelet with a folding clasp. The price for both models is yet to be confirmed at the time of publication but will be included once known. It will be available in Sept 2022 at a price of RM 3,480 in black on the rubber strap, and RM 4,340 in blue on the titanium bracelet. 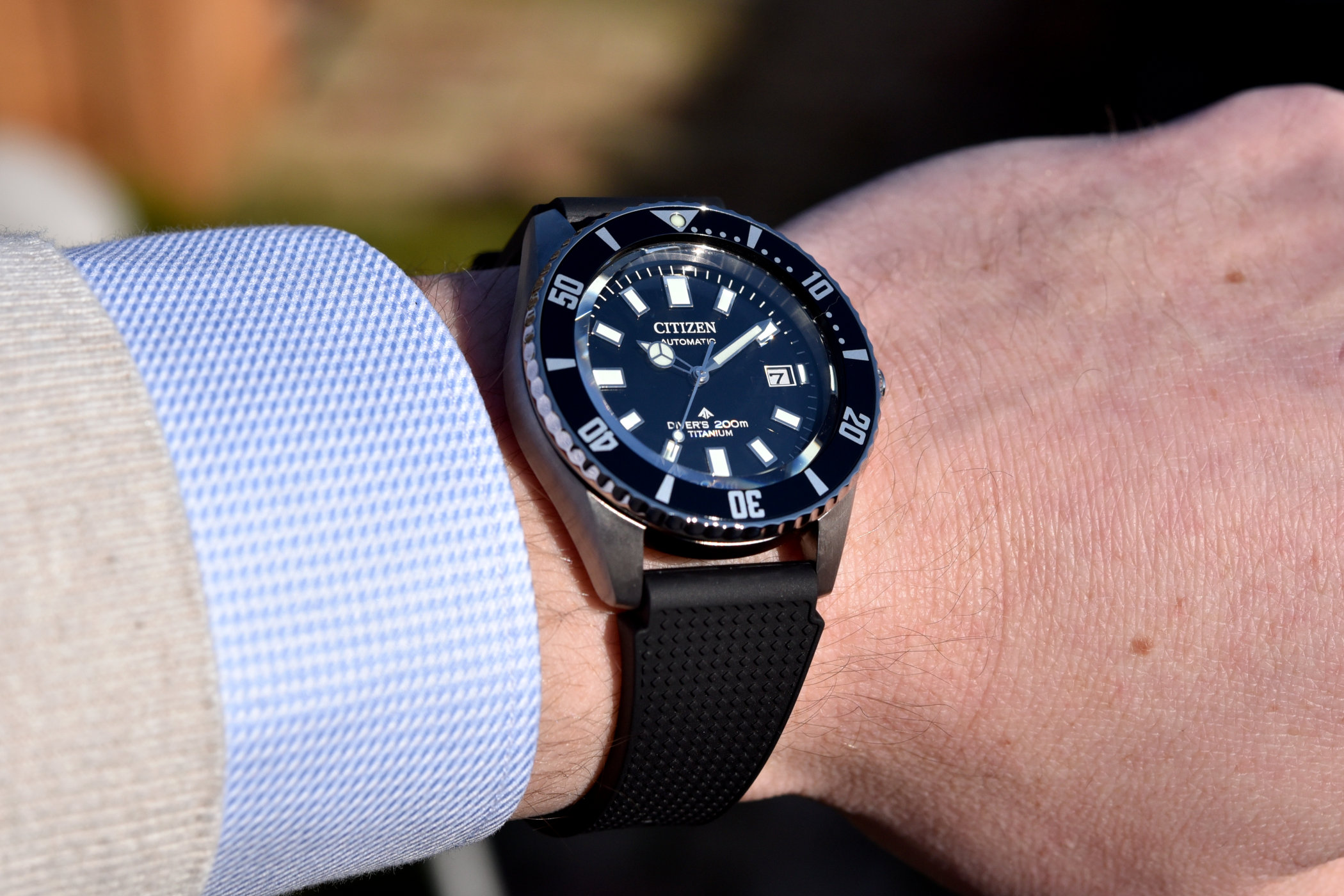 Whichever way you look at these watches, which I have done a while now, it’s hard to ignore the rock-solid proposition. The watch looks good, feels great on the wrist, and delivers a solid performance in key areas. Everything feels sturdy despite the low weight, and it will surely not disappoint on leisurely jumps in the pool, the occasional recreational dive or otherwise. It’s just a good, no-nonsense, ISO 6425 compliant dive watch, period.