Released last year, the Citizen Promaster Mechanical Diver 200m is a watch that our resident diver Derek took deep underwater, resulting in him calling it a proper instrument, a tool-watch personified. Just by looking at it, you immediately understand that it’s a watch made for action, not for desk-diving. It’s large, bold, ultra-protected and far from elegant. It’s purpose-built for underwater activities, and this is precisely what makes it cool. This summer, Citizen adds a new version to the collection, a limited edition reserved for the Asian market, which adds even more boldness to a watch that was already not the most discreet. Here’s the new Citizen Promaster Diver 200m “Green Anaconda” NB6008-82X.

Under the name Promaster, Citizen shows a long tradition of big and bold, but also highly capable diving instruments. Looking back at the history of the collection, which we explored in this article, you’ll see that the design of the 1982 Citizen Professional Diver 1300m or the emblematic Citizen Aqualand Promaster (a real icon of the tool-watch industry) have greatly influenced later creations, including this recent Promaster Diver 200m collection. Textured, full of facets and recessed areas, with apparent screws and studs, with protective elements all around, there’s not much hidden regarding the intentions of these models. Ultra-focused and strongly designed, these watches are not for the faint-hearted. They are made for action, and that’s about it. 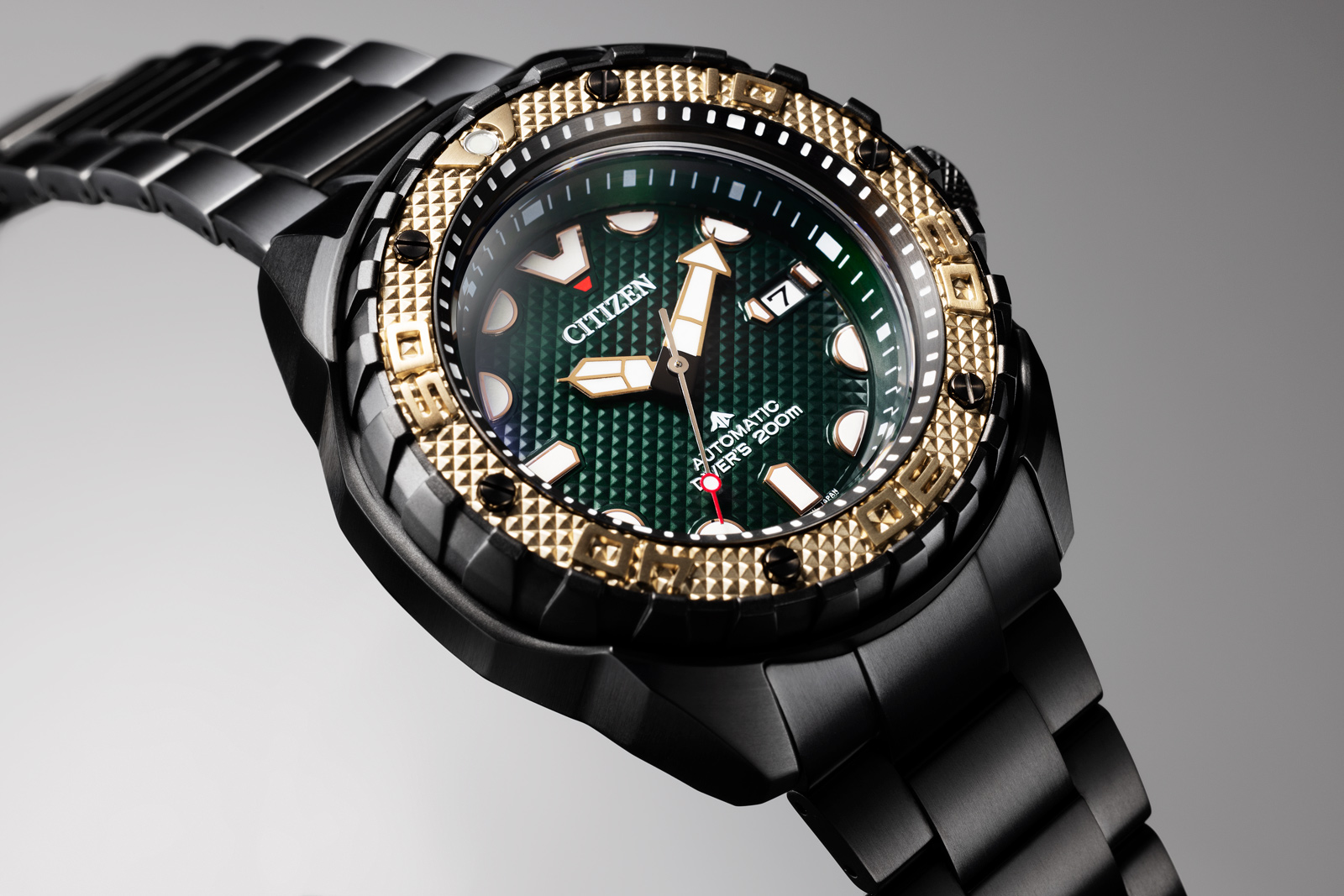 The inaugural models under this upgraded Promaster sub-collection were first launched in a rather classic colour scheme and combination of materials, being made of titanium with dark grey accents. Not to say that these were discreet and toned-down, but colours were not the reasons for this watch’s audacity. Things are changing now, with a new limited edition reserved for the Asian market, which adds a dash of green and gold-coloured elements, hence its nickname; the Green Anaconda. 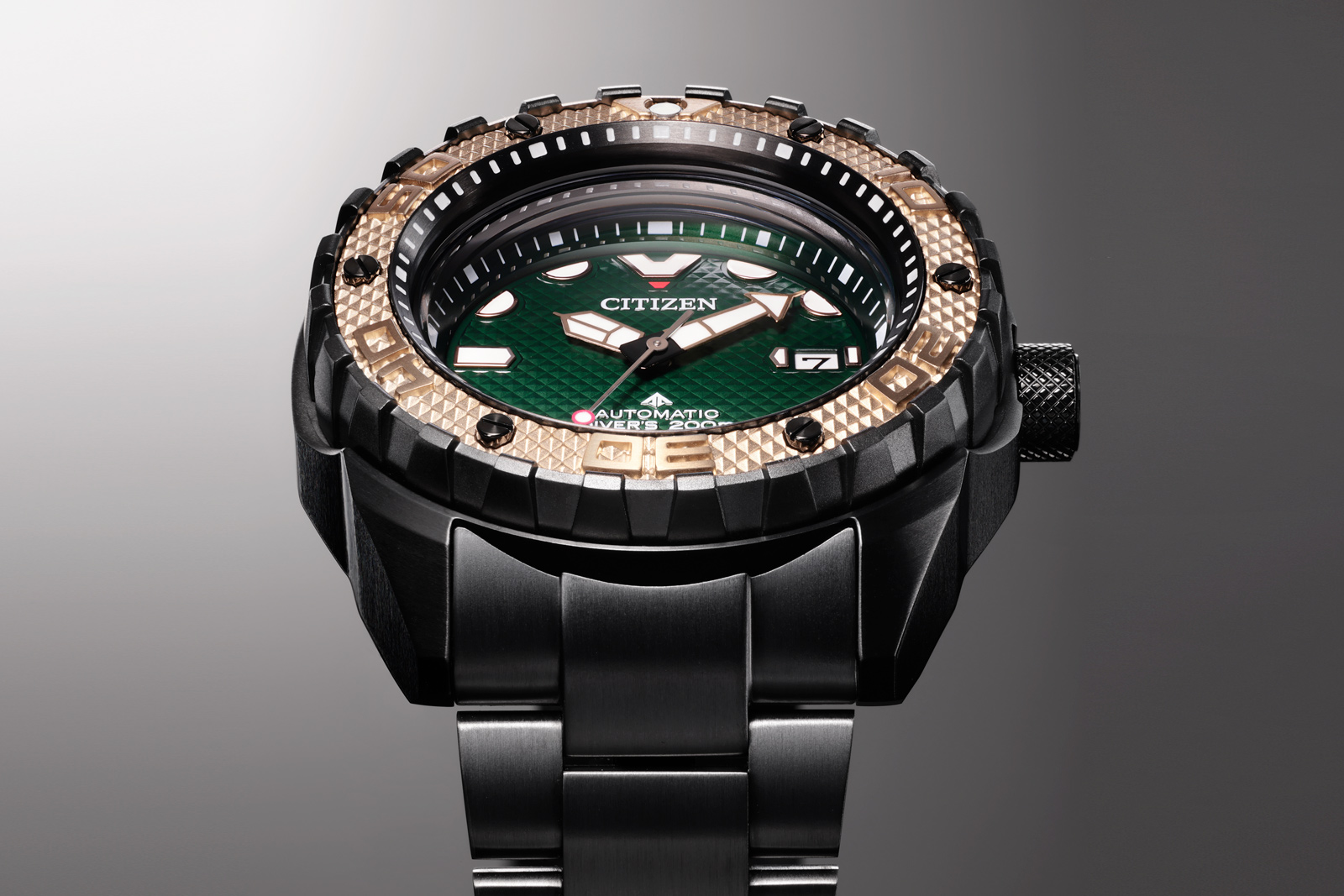 Here, if you’re looking for a stealth-coloured watch to keep it low profile underwater, not to disturb shy fishes during observation, move on. It’s not the right watch for you. Indeed, the new Promaster Diver 200m NB6008-82X is all about bold coloured accents, contrasting with a dark canvas. As such, the case retains the original proportions of the inaugural series, with a 46mm diameter and 15.3mm height. It’s here made of Super titanium with a black Duratect coating – not only the case is black DLC coated, but there’s a specific treatment on top so the black colour will adhere even more, and will be more resistant to scratches. In the same vein, the case is not standard titanium, but Citizen’s own light and strong formula… Remember that the Japanese brand somehow pioneered the use of this materia in watchmaking.

The rest of the case is technically identical, with a truly rugged design focused on protection. The unidirectional diving bezel is partially shrouded by the case and has trapezoidal-shaped indentations for maximum grip. The bezel is enhanced with a knurled pattern on the insert with raised double-digit numerals. It is here coated in Duratect Gold with black Duratect studs. The diving specifications are retained on this NB6008-82X, with a screw-down crown, a solid titanium screwed back, a thick domed sapphire crystal on top, and a 200m water-resistance. 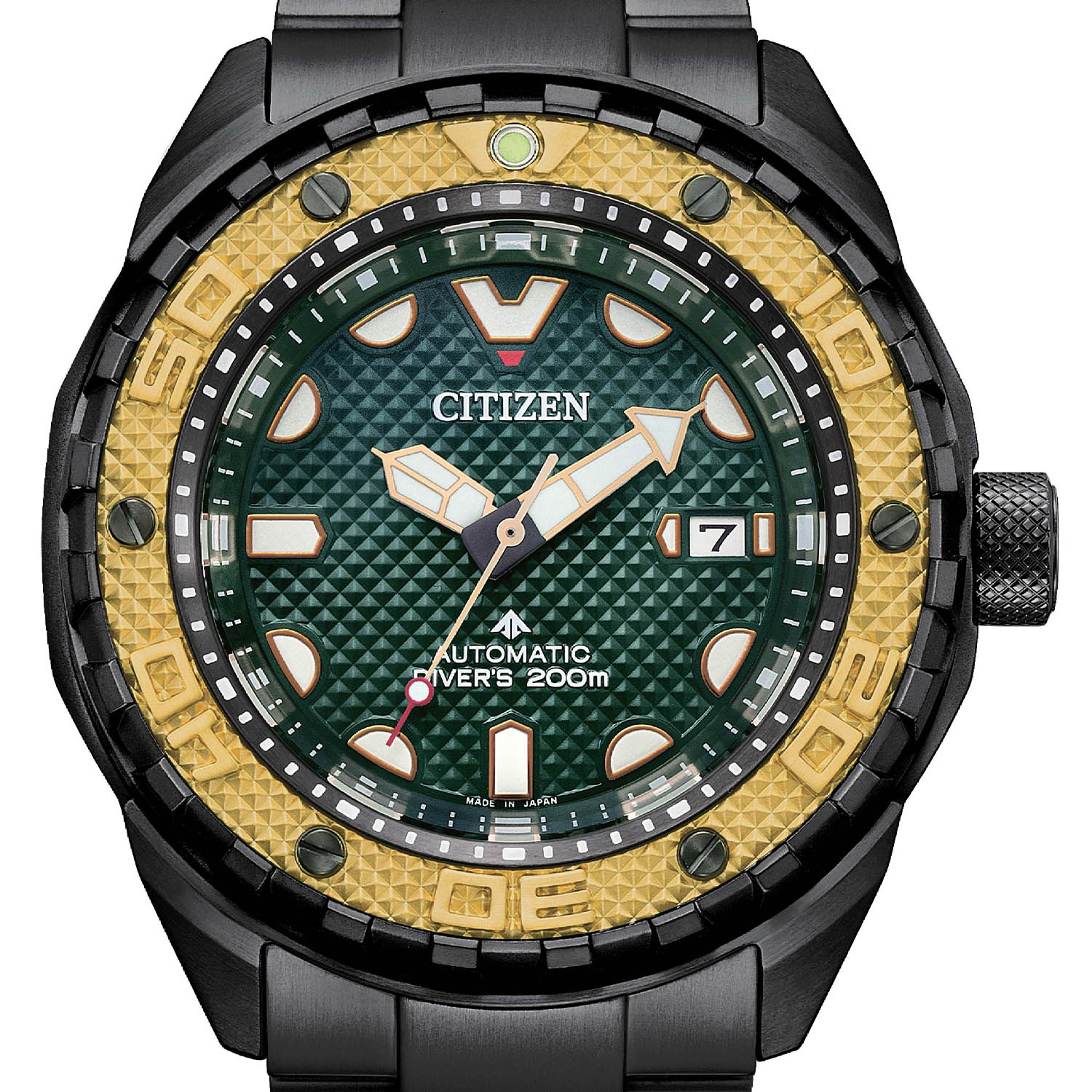 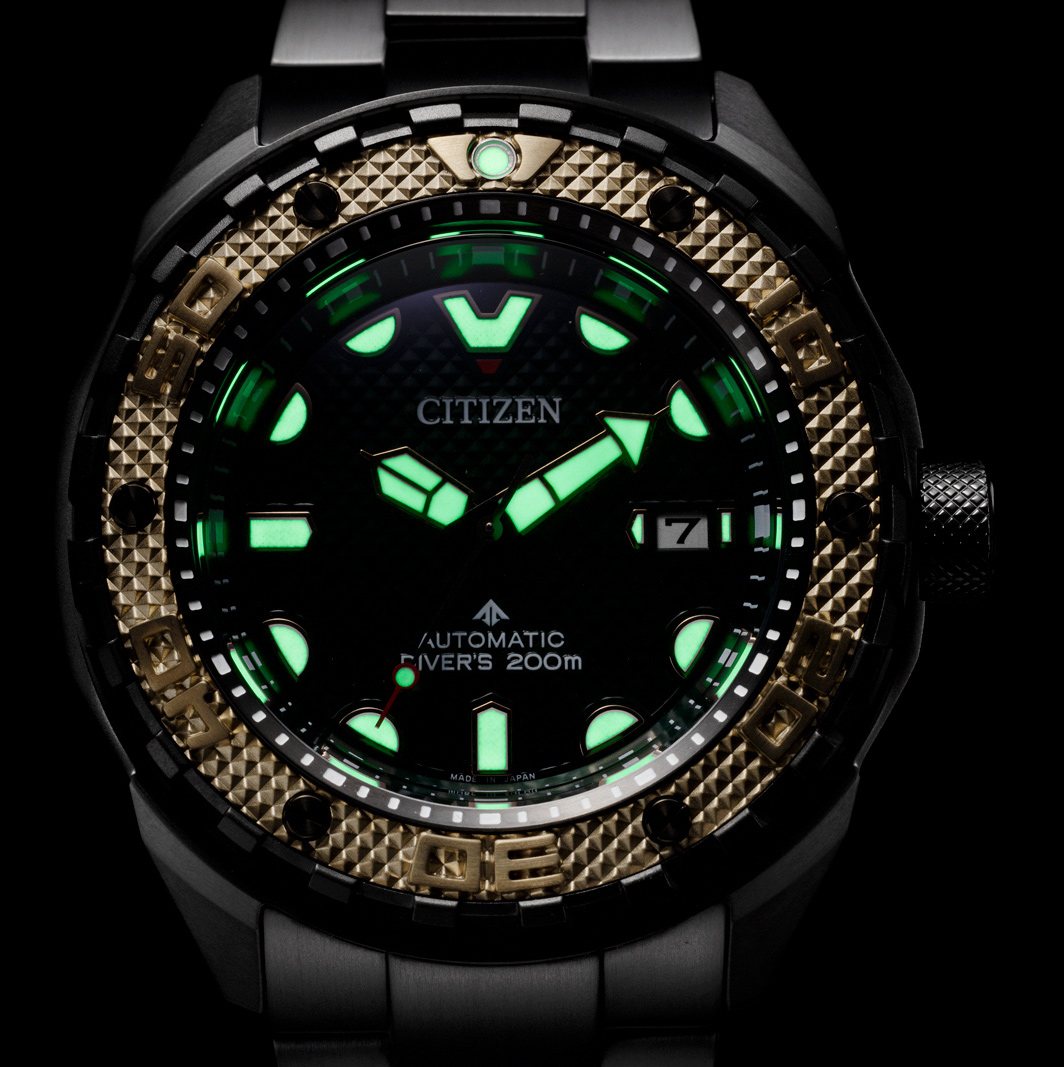 The other bold element on this Citizen Promaster Diver 200m Green Anaconda is the dial, which sticks to the same trapezoidal pattern, but is now executed in a deep emerald green colour. The markers and hands, large and originally shaped, are now coated in a gold tone, matching the bezel’s insert. All elements are largely coated with luminescent material and the date is framed by two smaller markers. 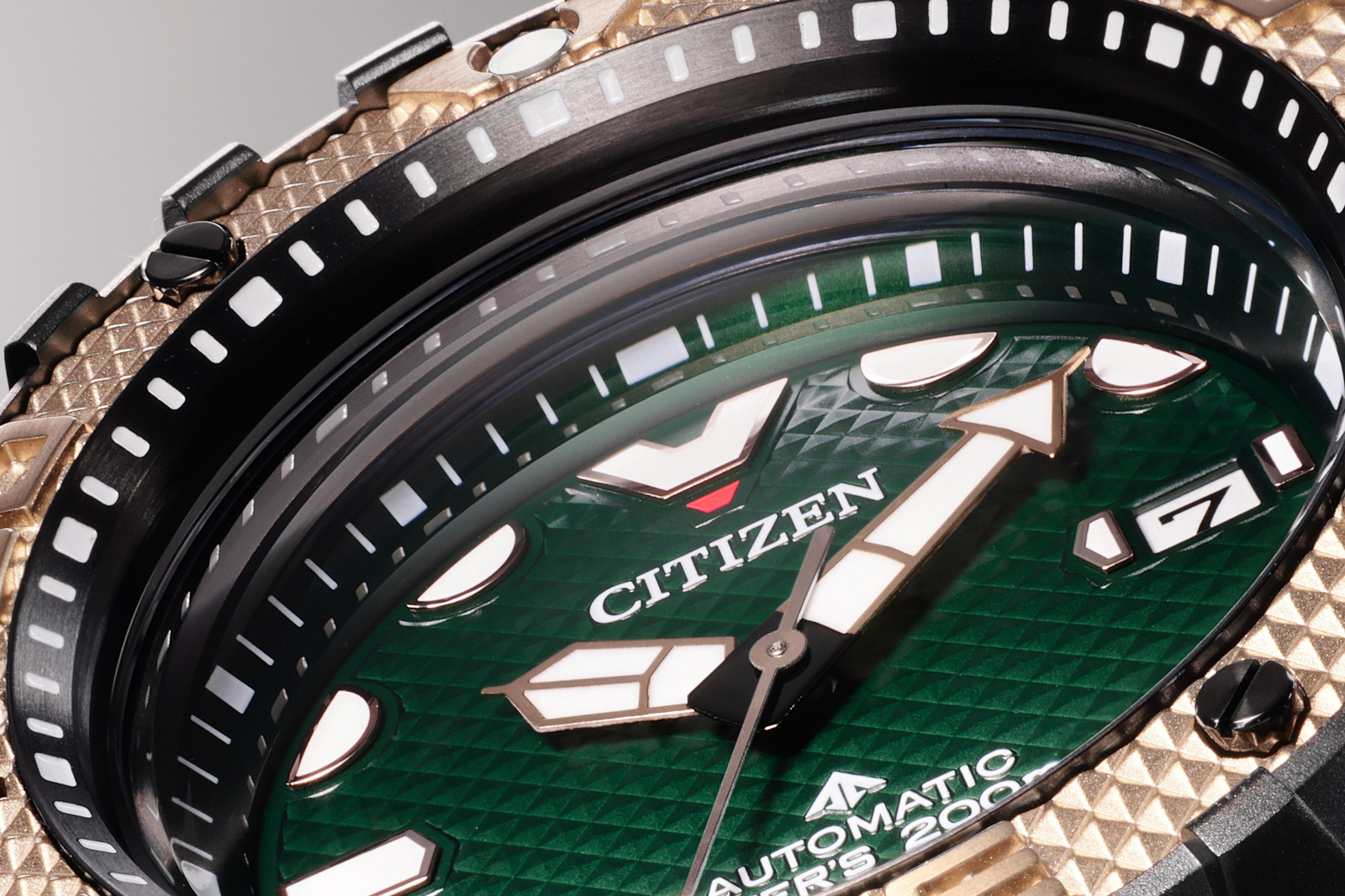 As for the technicalities, this Promaster Diver 200m showed multiple upgrades compared to standard models, the first being a focus on anti-magnetism. It is protected up until 16,000 a/m, which is about 3.5 times the industry’s standard of 4,800 a/m. The second important point is the movement, the in-house calibre 9051, marking an improvement over standard movements of the 9000 series. The movement uses 24 jewels, runs at a frequency of 28.800vph (4Hz) and boasts 42 hours of power reserve when fully wound. It is regulated to run within -10 to +20 seconds per day. 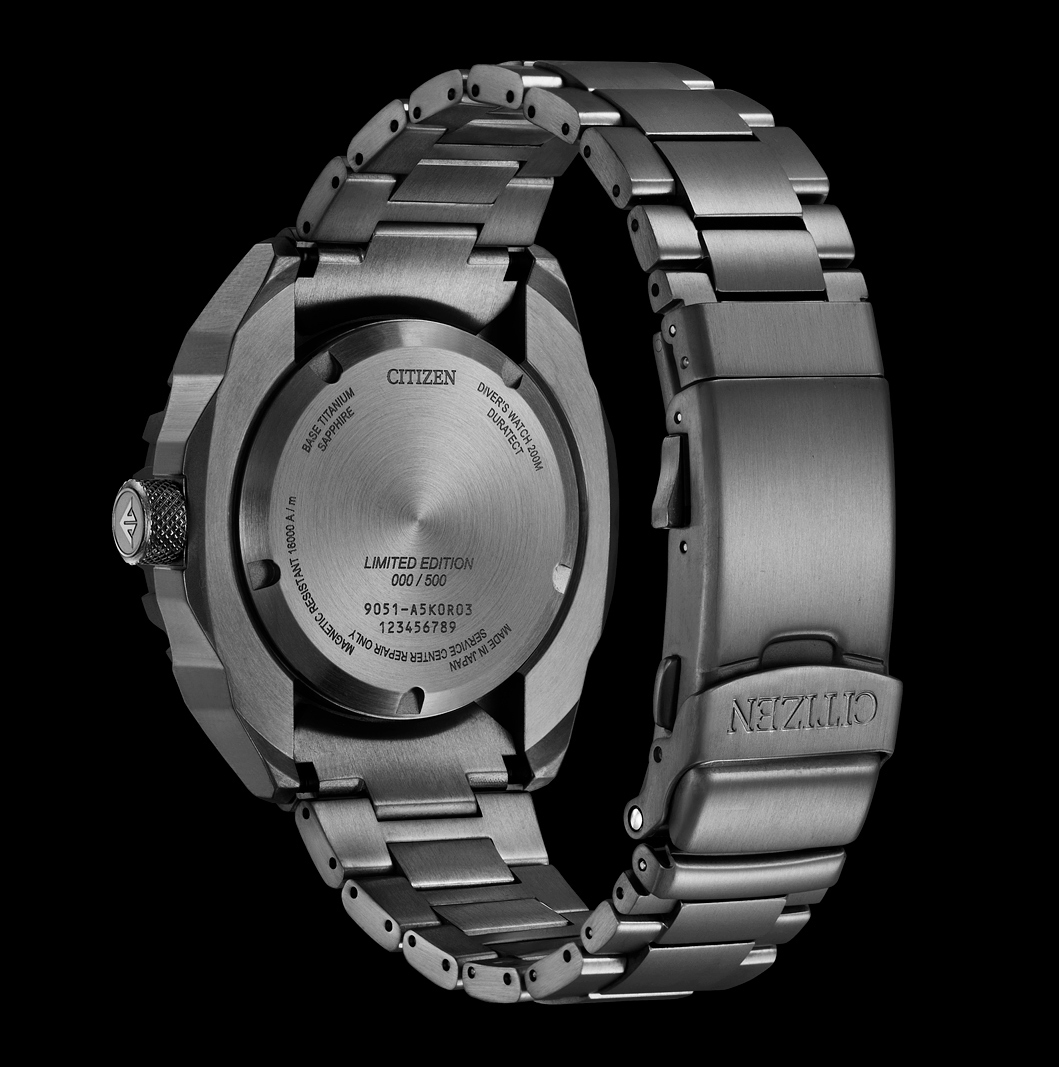 This Green Anaconda edition is worn on a black Duratect coated Super Titanium bracelet, with a folding clasp that integrated both a micro-adjustment device and diving extension.

Available from August 2022 only at Citizen boutiques and retailers on the Asian continent, the Citizen Promaster Diver 200m Green Anaconda NB6008-82X is limited to 500 pieces. Price-wise, it marks a rather impressive jump compared to the classic version, being priced at RM 7,040

Availability: Asia-Only limited edition of 500 pieces
Available as of August 2022