The entry-level Seiko 5 Sports collection has been the perfect playground for creativity, resulting in cool models (and some slightly overdone too, to be honest) with bold looks and original colours. It’s also been used as a vehicle for the resurrection of vintage elements, such as "Pogue" look or classic field-inspired dials. For its latest limited edition based on the 5 Sports, Seiko is teaming up with Japanese artist Kosuke Kawamura, and the result is a pair of very cool models, the SRPJ41 and SRPJ43, directly inspired by the 1970s Time Sonar.

Kosuke Kawamura is a Hiroshima-born creative who started off as a graphic designer and began exhibiting his artworks by the early 2000s across Japan and the globe which led to collaborations with the likes of Adidas, G-shock, Uniqlo, Gundam, Evangelion and Akira. Known for his collage-based style, he first started off with digital collages utilizing Photoshop and Illustrator but moved towards the traditional method of shredding magazines. Using this inspiration as well as classic elements from vintage Seiko watches of the 1960s and 1970s, both parties now present the Seiko 5 Sports Kosuke Kawamura SRPJ41 and SRPJ43. 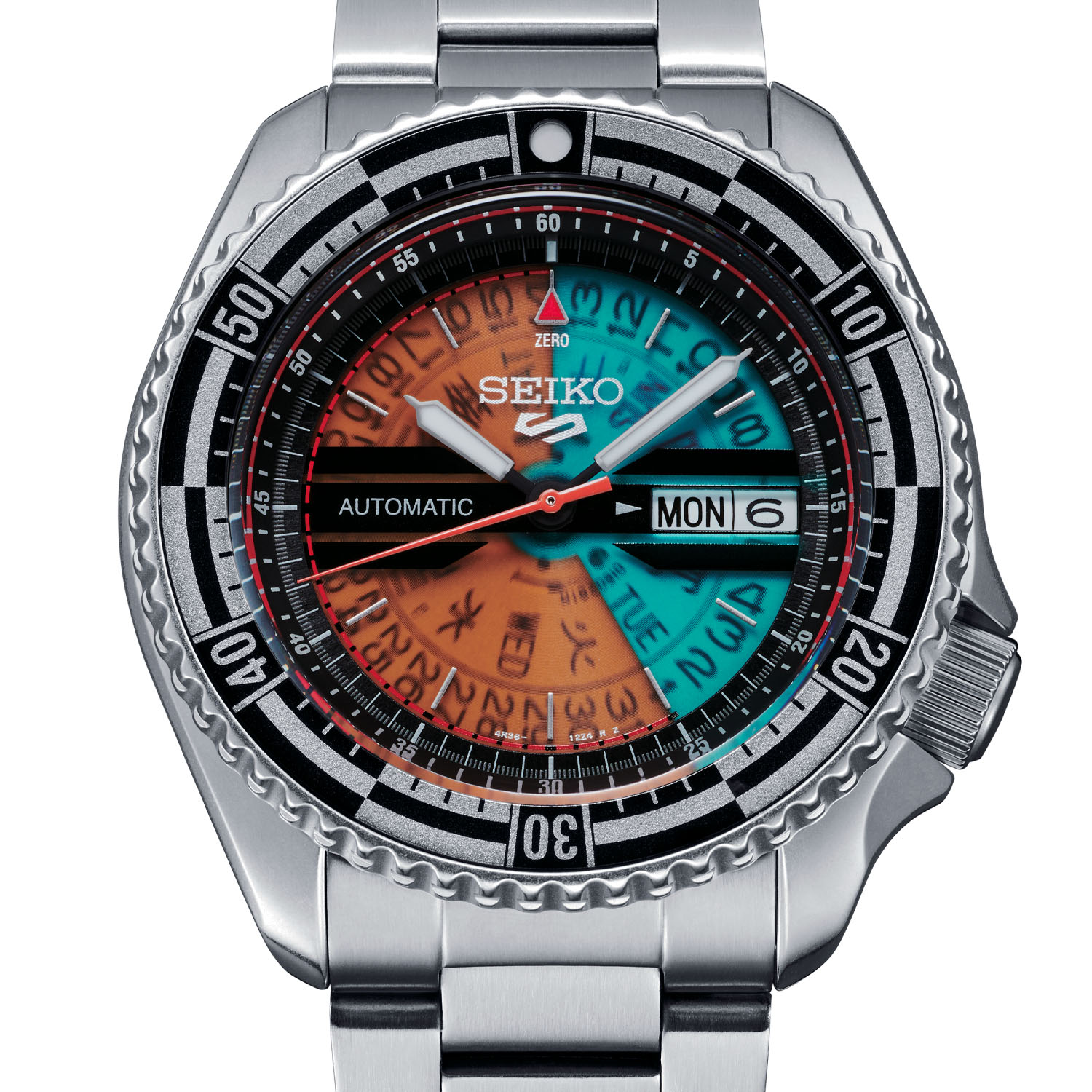 The base for these two new limited editions couldn’t be more classic, being entirely identical to other Seiko 5 Sports models. It means a 42.5mm case made of stainless steel, with a compact 46mm lug-to-lug measurement, a crown positioned at 4 o’clock, a Hardlex crystal, a screwed caseback, a comfortable 100m water-resistance and a unidirectional bezel on top. Inside, no surprises either, as these SRPJ41 and SRPJ43 rely on the ubiquitous calibre 4R36, an automatic entry-level movement with 3Hz frequency and 41-hour power reserve. Both come equipped as standard with a 3-link brushed stainless steel bracelet closed by a folding clasp. 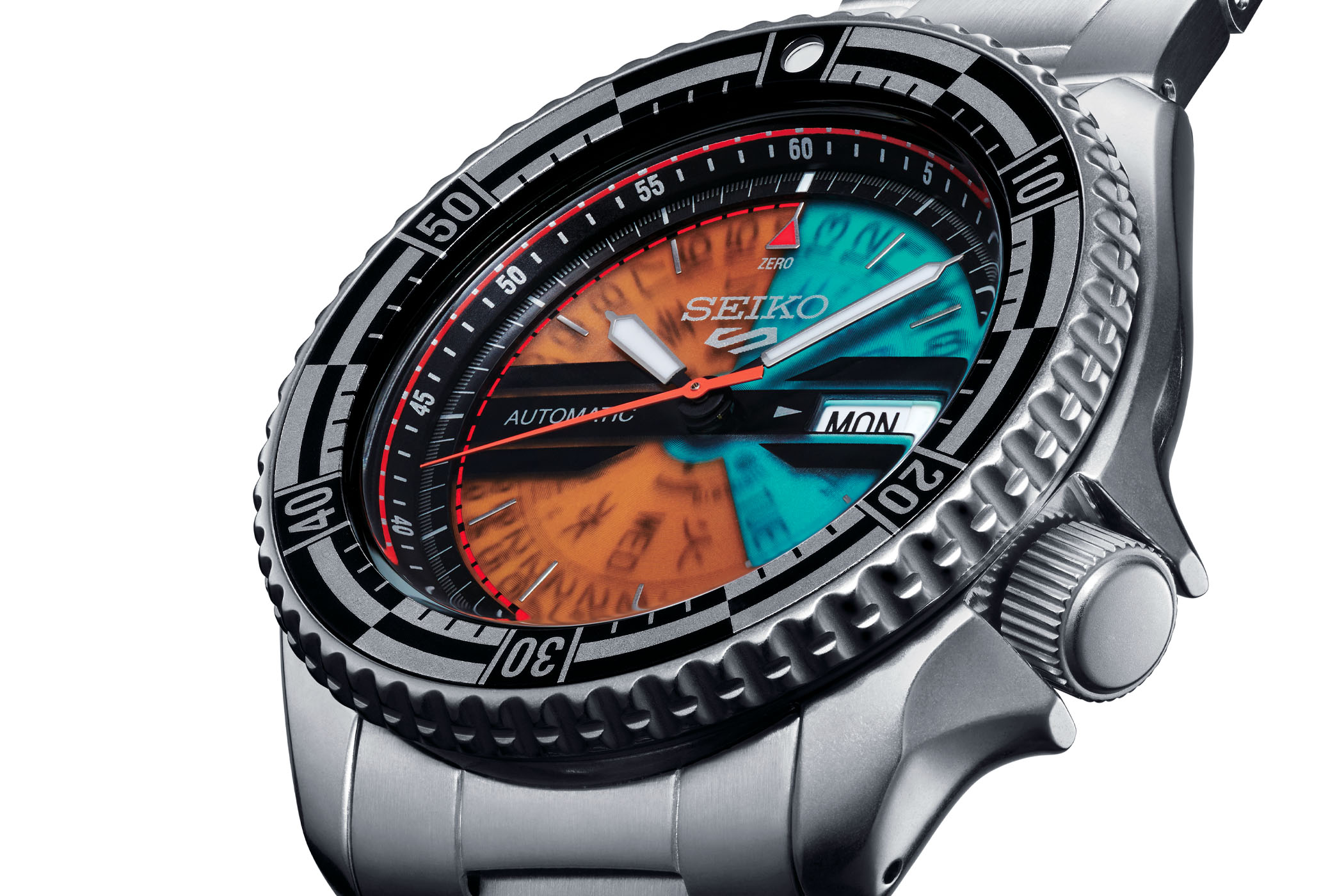 What matters in the context of these Seiko 5 Sports Kosuke Kawamura limited editions are the colours, the bezel’s insert and, mostly, how the dial has been treated. The latter is now translucent and partially coloured, leaving the view opened on the day and date discs underneath. Also, graphic printed elements framing the Automatic indication and the day-date window have been printed on its surface, and the dials have a two-colour combination that is bold, graphic and fresh. The SRPJ43 model combined grey and green, while the SRPJ41 version has an orange/green scheme. And there’s a discreet concentric texture inside this translucent plate, creating a cool blurry effect that is reminiscent of Kawamura’s shredded art. 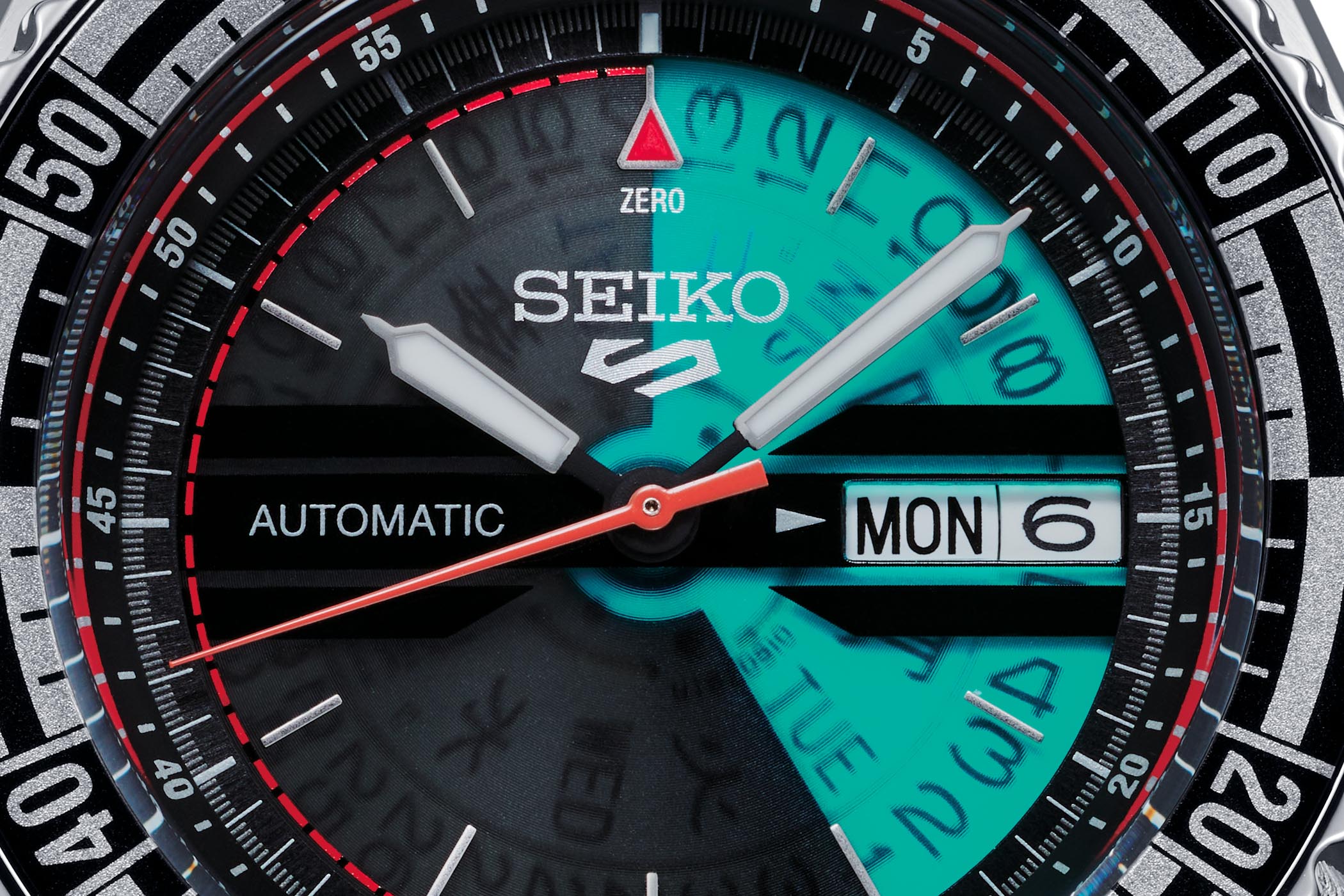 These watches are directly modelled after the 1970s Time Sonar models, a style that can also be seen in the handset, fairly different from what is usually found on Seiko 5 Sports watches. The partially tinted dials are framed by an inner flange, printed with a colourful precision track. A red triangle marks the zero. In the same vein, the bezel’s insert, in aluminium, has a graphic vibe with contrasting silver and black areas. All in all, a rather unique and original look that has a clear retro vibe. 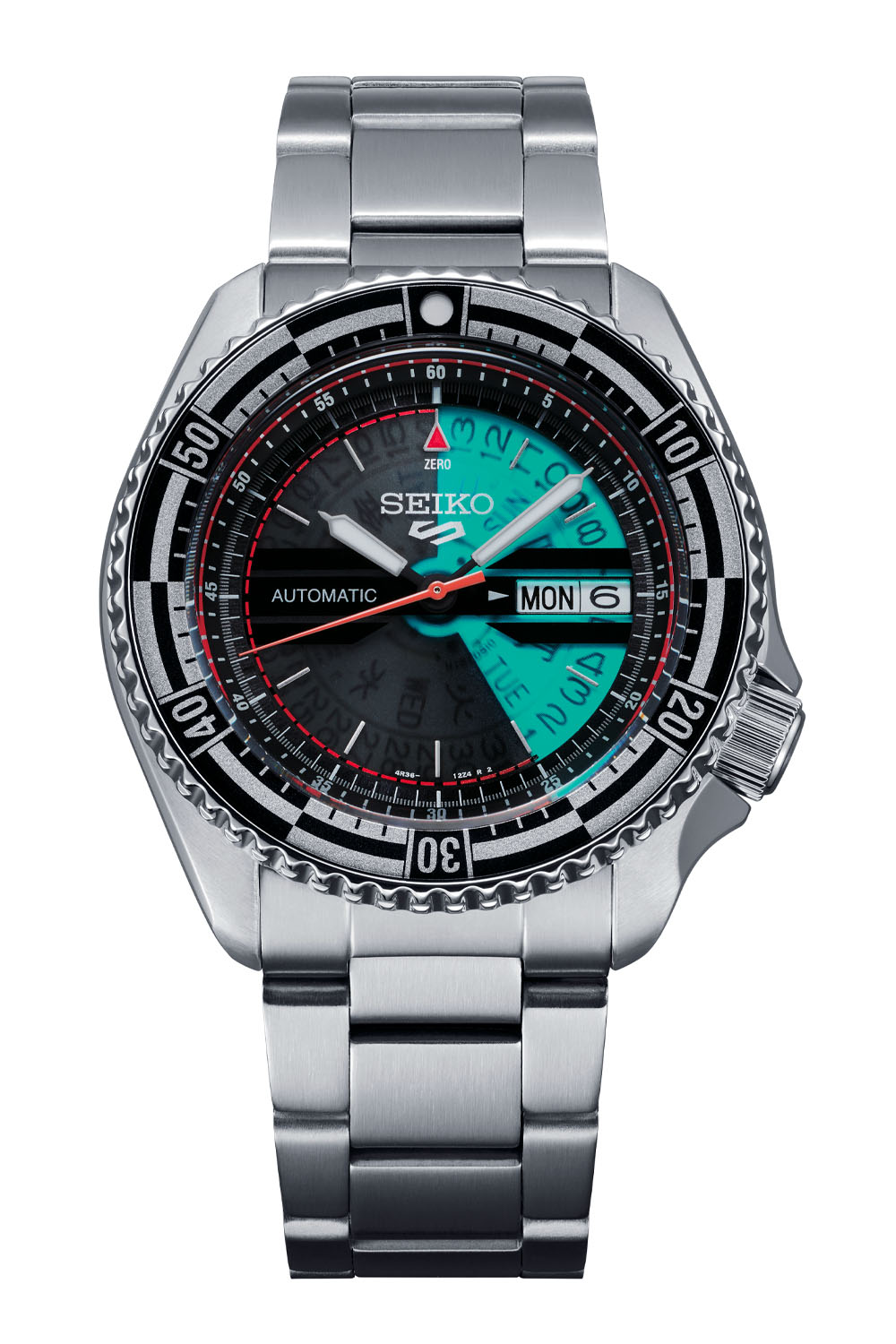 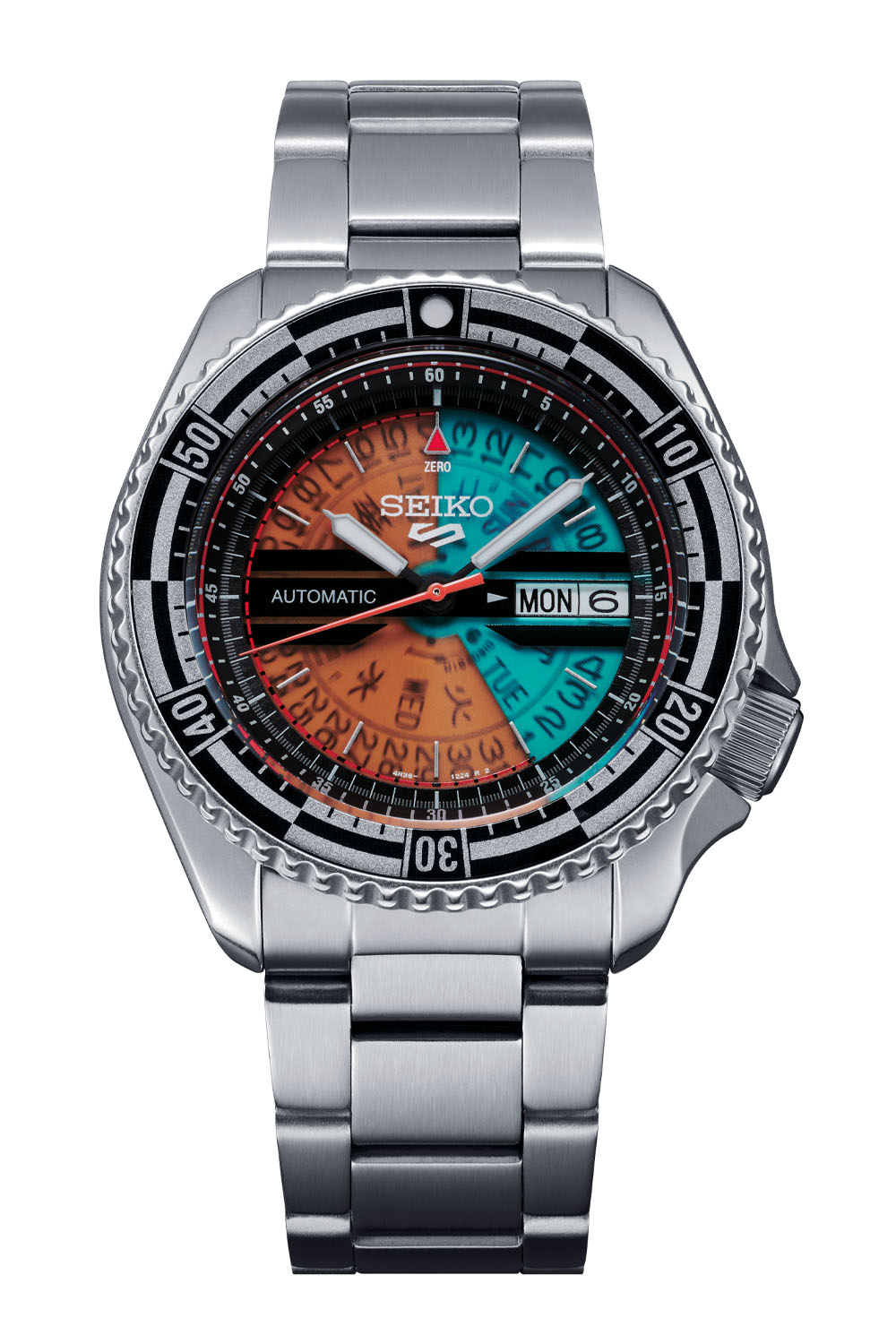 Both Seiko 5 Sports Kosuke Kawamura are released as limited editions. The grey/green SRPJ43 is delivered with an additional Nylon NATO strap and is limited to 500 pieces. It will retail for approximately RM 2,750. The orange/green SRPJ41 is limited to 3,000 pieces and retails for RM 2,480.