Tuna, Samurai, Alpinist, Turtle, and many more… There are dozens of emblematic watches with Seiko‘s logo printed on their dials. Many are part of the Prospex range, dedicated to dive watches and professionally-speced models in general. The collection has been largely revamped recently, with many of the classic models updated and upgraded with more resistant materials and better execution – think about the King Samurai, the King Turtle or the new Shogun. Slightly overlooked recently, it’s now time for the Sumo to resurface, with new editions with revised materials and cool design elements. Here are the Seiko Sumo Prospex Diver 200m SPB321J1 & SPB323J1.

AN EMBLEMATIC MODEL FROM 2007

As with many of Seiko’s dive watches, the nickname Sumo wasn’t official at first… but it stuck and is now even recognized by the brand itself. A couple of theories can explain the origin of the name. The muscular, oversized appearance of the watch paired with a thin 20mm bracelet could be the first explanation. Also, the possible resemblance of the 12 o’clock marker with a Mawashi, the underwear worn by Japanese sumo wrestlers during a fight. Or perhaps it was that the bezel’s shape resembles the Dohyo or ring where Sumo takes place. Whatever the reason, the name is now well established.

The Seiko Sumo was introduced in 2007 under the reference Prospex Diver 200m SBDC031 as a mid-range offer, above the entry-level Turtle and Samurai, but below the MarineMaster 300m. A better movement than the two affordable pieces on one side, a case with more attention to detail too, but a lower water-resistance and no sapphire crystal like the MM300. This watch was typical of Seiko’s Divers, with a large and hefty 45mm x 13.5mm case, a crown positioned at 4 o’clock and large markers on the dial. It didn’t evolve from 2007 to 2018 and was powered by the well-known automatic calibre 6R15.

In 2019, under the new references SPB101J1 and SPB103J1, the Sumo was slightly revised. The overall design was maintained, with only minor alterations. The bezel insert was redesigned with a more discreet scale, a new green dial/bezel model was launched. What really changed was the use of a sapphire crystal and the new calibre 6R35, with a beefed-up power reserve.

In the same vein as what’s been done in 2019, as well as what we’ve seen on the King Samurai and King Turtle, Seiko this year once again adds another layer of high-end materials to one of its emblematic watches. The previous Sumo already started with a sapphire crystal. The 2022 Seiko Sumo focus on the resistance of all external parts, with new materials, as well as its looks, with new colours and dials. 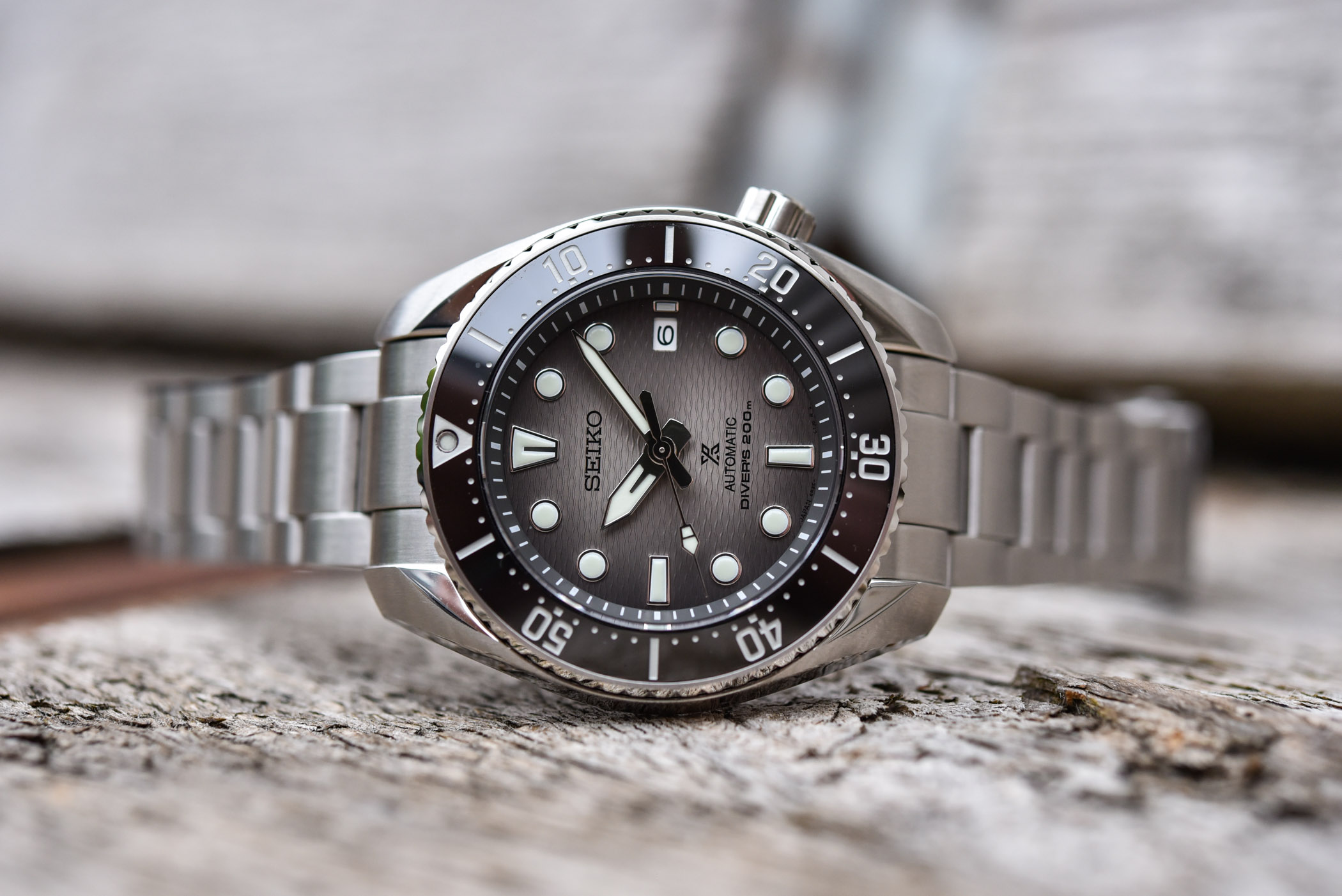 Looking at the case and the overall design, these updated Sumo SPB321J1 and SPB323J1 are typical no-surprise models. It’s all about improving the quality, not the style. As such, the oversized dimensions of the original Sumo are maintained. No downsizing policy here, the Sumo was and still is a large watch with a 45mm diameter, a 12.9mm height and an unmistakable lug-to-lug measurement of over 52mm. Reading this will certainly stop more than one potential customer, however, keep in mind that despite what the specification sheet indicated, the Sumo has always been more comfortable on the wrist than you’ll ever imagine. But don’t expect the comfort of one of the new compact Prospex.

The overall shape of the watch is also intact, with the same twisted lugs and curved profile, with alternating polished bevels and brushed lines. The crown retains its 4 o’clock position and the watch will feel familiar to owners of the previous generations. The sapphire crystal, screw-down caseback and crown and 200m water-resistance are also unchanged. What has evolved then…? First and foremost, the watch is now made of stainless steel with Super-Hard coating, benefitting the overall resistance of the watch in action. 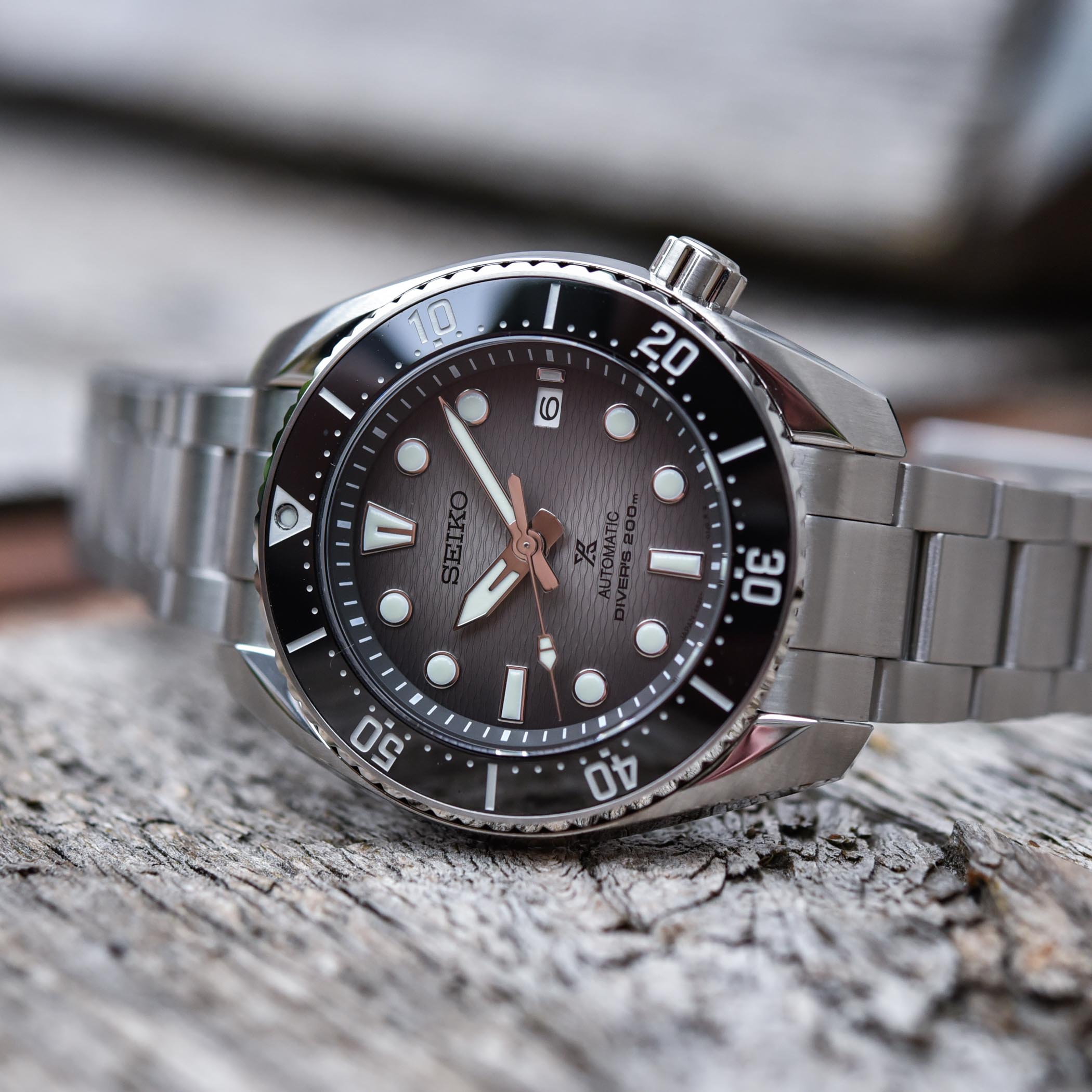 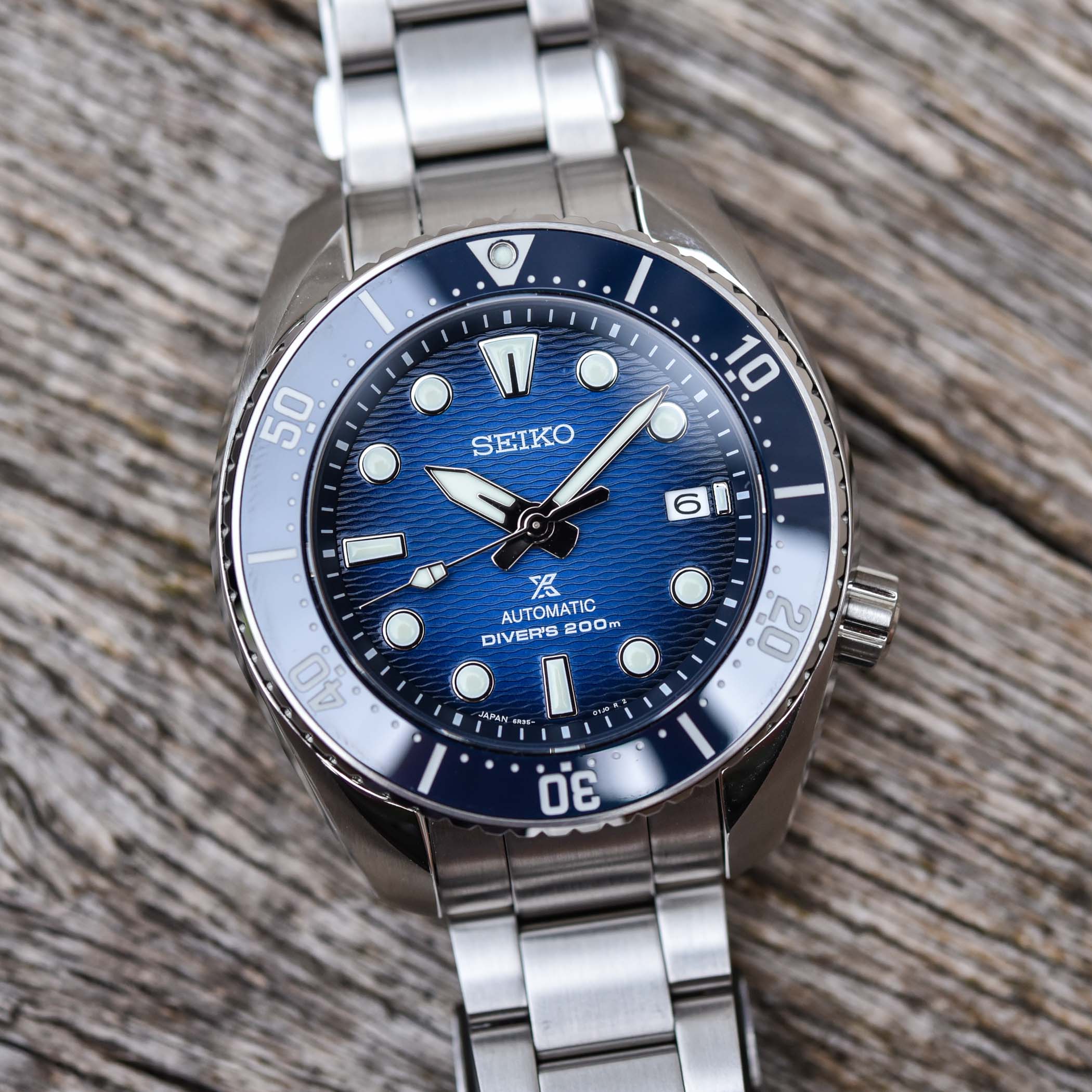 Second, the bezel now features a ceramic insert with a redesigned 60-minute scale. Gone is the bold scale of the past models, as well as the internal facet that used to be found in the two previous generations. The Sumo SPB321J1 and SPB323J1 are now equipped with a flat and glossy insert, available either in black or dark blue depending on the dial. 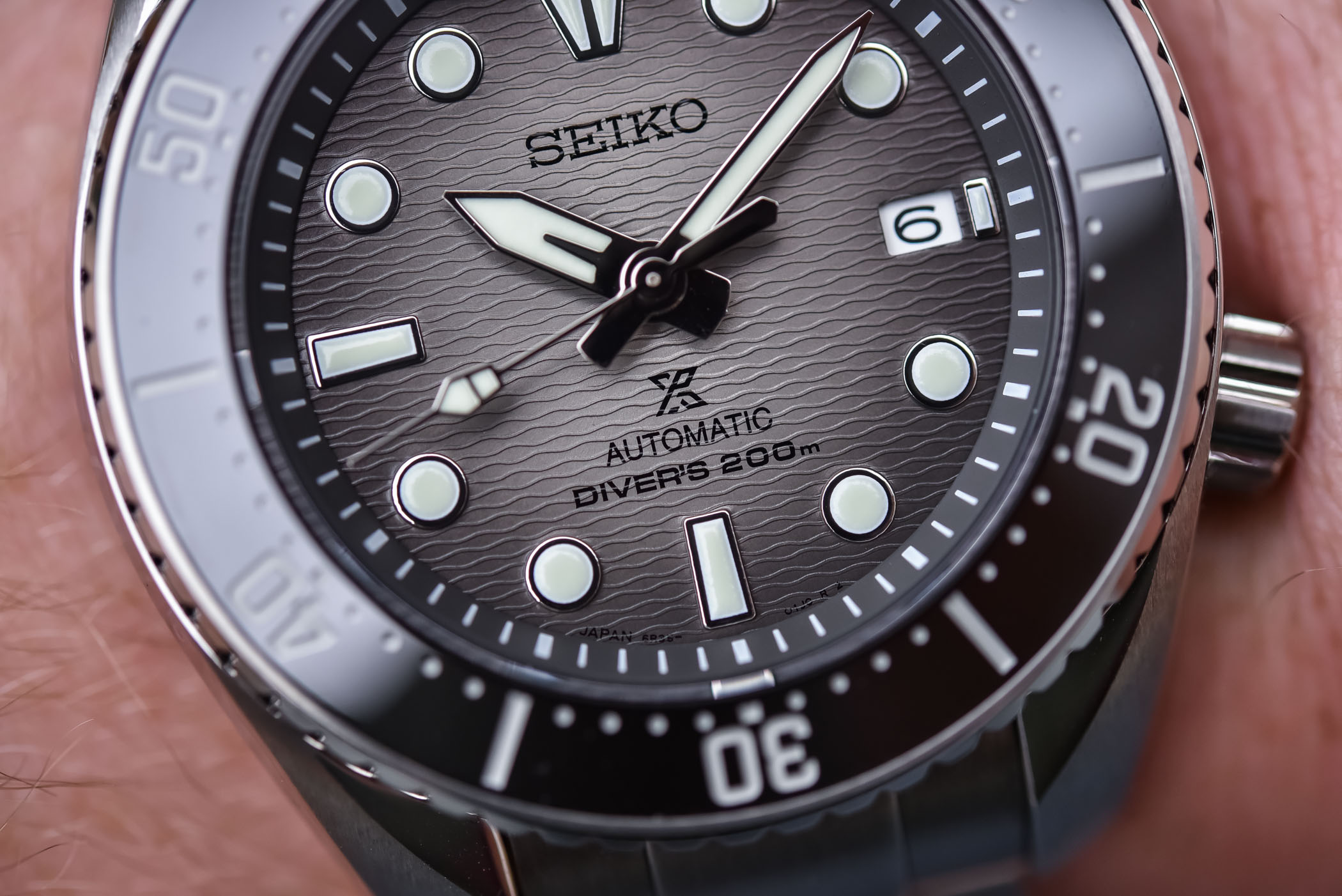 Some evolutions are also visible on the dials. First of all, the emblematic markers and hands, which participated in the overall design of the watch since 2007, are intact. The signature “Sumo Belt” index at 12 o’clock is still present and the handset retains the same shape as before. All elements are largely coated with Lumibrite, and there’s a new small luminous marker next to the date window – the latter being unframed now. What has changed are both the colours and the textures. The dials now have a gradient effect over a blue or grey background, which has a fine horizontal wave pattern. Pleasant, and relatively discreet, it adds a touch of fun to an otherwise pretty conservative update. 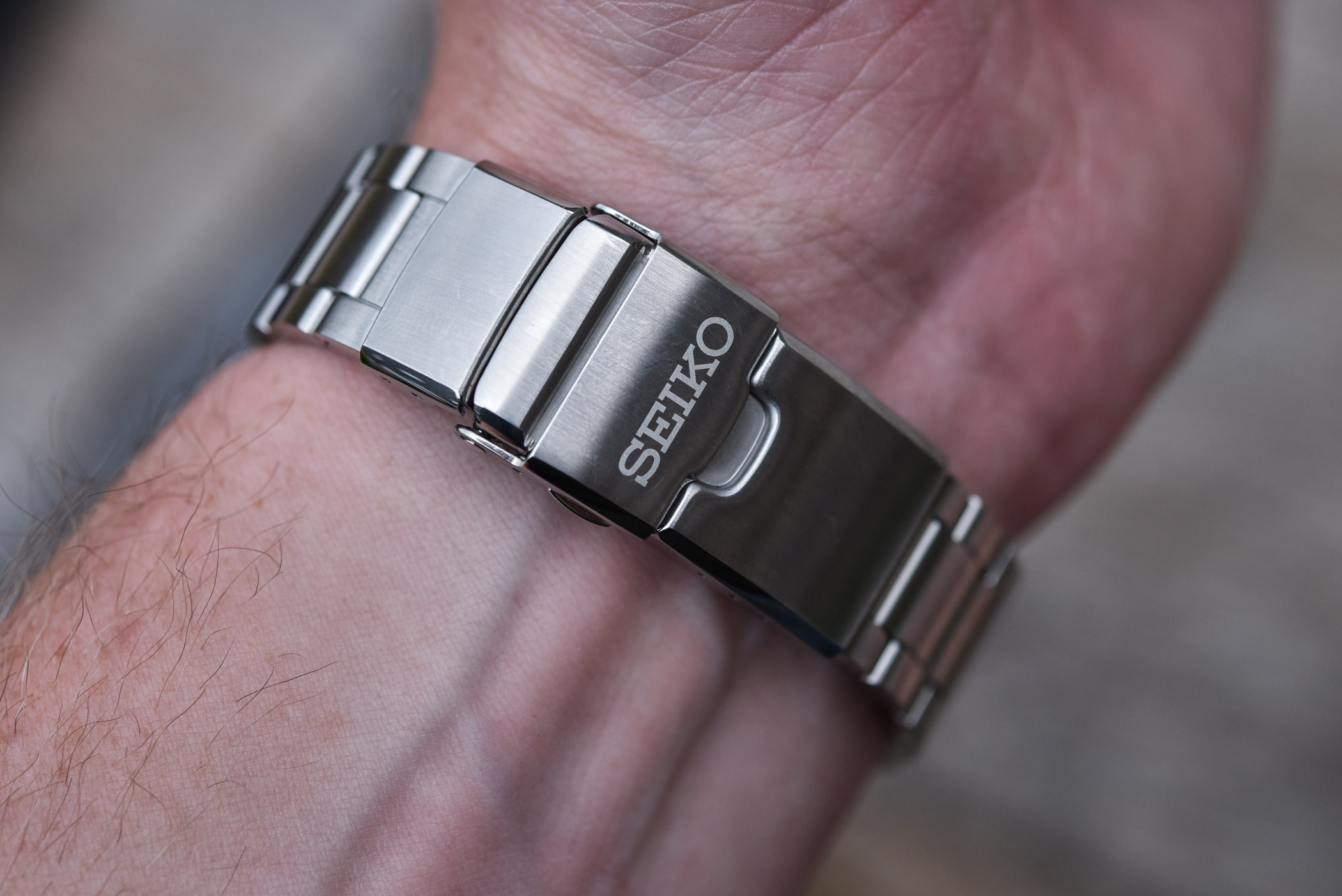 If the movement remains the same as before, understand the 3Hz and 70-hour automatic calibre 6R35, the bracelet has been redesigned. Also made of steel with Super-Hard coating, the 3-link bracelet is now entirely brushed and features a new, solid folding clasp with secure lock, push-button release and wetsuit extension. 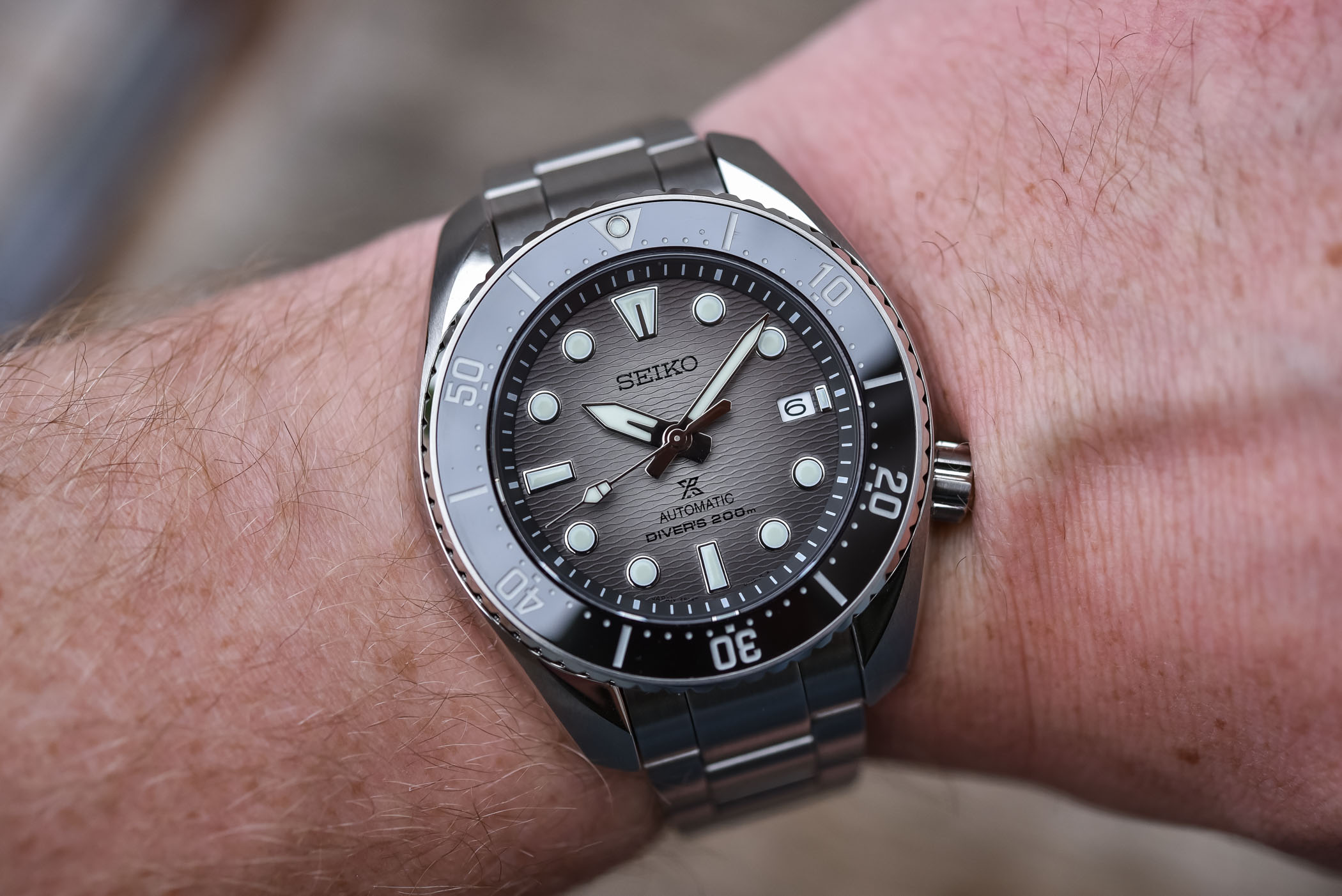 The new Seiko Prospex Diver 200m Automatic Sumo SPB321J1 (blue) and SPB323J1 (grey) will soon be available from retailers, and will be priced at RM 5,650 – once again showing Seiko’s upmarket strategy, however, partially compensated by multiple upgrades and improved overall quality and resistance.